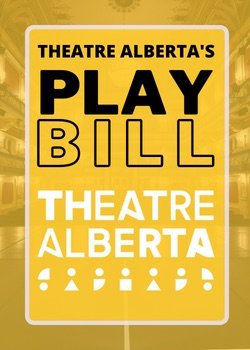 Theatre Alberta’s Playbill is the province’s most comprehensive source of theatre production information and plays in Alberta. Listings include professional, community, and post-secondary theatre productions and festivals.

Scroll down to see our listing of productions throughout Alberta, ordered by show dates. Use the search bar to search for productions based on details like city, accessibility features, genre, or a keyword of your choosing.

TREASURE ISLAND
Pumphouse Theatre Dec 9 - 17, 2022
A holiday pantomime by Ben Crocker
Directed by Alana Gowdy
www.morpheustheatre.ca or 403-246-2999
Show Times: Wed - Sat @ 7:30pm; Matinees Dec 11 & 17 @ 2:00pm
Tickets: Adults $23, Student/Senior $18
If you didn’t get enough pirates last year, this one is for you! Treasure Island is the story of young Jim Hawkins and his adventures aboard a pirate ship headed by the fearsome Long John Silver. In this version of the tale however we also find out what happens to Jim’s mother, his true love Jenny, her father the Squire, Polly the Parrot and of course the Smuggler’s Cove Women’s Institute as they join Silver’s band of bloodthirsty pirates. A madcap, laugh a minute pirate adventure story from start to finish!
“The wittiest and most original writer working in pantomime today” – AS Magazine

Christmas In The Creek

Celebrate the holiday season with our original production of the musical Christmas in the Creek!

Byron Martin and Simon Abbott are back at it again, fresh off of Jason Kenney's Hot Boy Summer with a new developmental musical satire based on their favourite Christmas movie.

Sexy German criminal Alan Rickman-I-mean-Hans-Gruber leads an international gang of terrorists who seize an office tower during a Christmas party. John, a cop from New York, is trapped on the upper floors. He’ll need a Christmas miracle to save his power-dressing wife Holly and the other hostages.

Join the team for the first ever viewing of their newest project in development. If you love it, we'll bring it back even bigger next year to start a new Grindstone Christmas tradition.

This all-women band promises to provide a fresh take on iconic hits, such as Crocodile Rock, Benny and the Jets, Candle in the Wind, Piano Man, New York State of Mind, Honesty and many, many more! Join Patricia Zentilli (Mamma Mia, 9 to 5:The Musical), Ruth Alexander (Once, A Christmas Carol), Chariz Faulmino (A Christmas Carol, Almost a Full Moon), and Jameela McNeil (As You Like It, The Color Purple) as they bring the house down!

Franky Pierson knows something has begun. A shift in the air and a new family schedule. Stapled on smiles—until her mother vanishes. Adrift, Franky must piece together the facts to discover the truth of the situation, guided by her inner voice—Freaky Green Eyes. Part coming of age story, part mystery, Freaky Green Eyes asks questions about domestic abuse and the lengths we will go to avoid seeing what is right in front of us.
Adapted by Emma Houghton. Based on the novel by Joyce Carol Oates.
This is show is a part of our Fringe Theatre Season. Visit fringetheatre.ca/season to learn more about our 2022 - 2023 Season.

Three imagined encounters between Joan of Arc and American writer Dorothy Parker. Both are facing death, with only words to defend themselves. Joan has failed to drive the oppressors out of her country; Dorothy despairs about humanity and her own legacy. But though famously selfish and self-destructive, Dorothy may actually be able to give Joan – and us – reasons to hope.
A world premiere by one of Alberta’s true treasures.

Blissfully ignorant, a young man at the tipping point between adolescence and adulthood is struck by lightning, shocking him into a free fall of survival, atonement, and search for self knowledge. STRUCK is based on playwright Eric Rose’s true story surviving a lightning strike while camping with friends on Sudbury’s Long Lake during the summer of 1999. The show explores the lightning strike as both physical and psychic mapping: fractured friendships, leaving home, losing loved ones - looking backward and forward in time from a point of view that can only be perceived in the electrified filament of one's mortality.
Rose originally wrote and performed the first act of STRUCK in Calgary as part of the 2005 Solocentric Festival. Recently, he was commissioned by Ghost River Theatre to develop a second act of the play. "My desire to revisit and re-contextualize this story was spurred by the sudden death of my father, and recently entering into middle-age. As an artist, I find myself eager to explore and investigate themes surrounding growing up, mortality, home towns, and life’s sudden and irrevocable moments of change.” STRUCK reflects Rose’s critically-acclaimed, highly-theatrical aesthetic, as a compelling, thoughtful, and viscerally surprising experience created with a team of committed and insightful collaborators.
Showtimes: January 31 - February 11, Tuesdays - Fridays, 7:30 pm - 9:00 pm
Location: West Village Theatre
Ticket Prices: Pay what you can afford

A multidisciplinary storytelling show about living and working with guide dogs. Blind storyteller and disability rights activist Kim Kilpatrick tells charming, insightful and surprising stories about Tulia and her other canine companions alongside acclaimed visual artist Karen Bailey’s beautiful paintings of Stanley, a guide dog puppy she raised. This collaboration documents the journey from puppy to working guide dog for the blind, incorporating storytelling, painting, video, audio description and music. And yes, Kim’s dog Ginger will be onstage!

This ballet by Bengt Jörgen is an innovative take on the classic fairy tale. Jörgen’s choreography balances the fairy tale elements of the story with a contemporary treatment of Cinderella and her family relationships. Returning to the original Russian tradition of having women perform the roles of the stepsisters, Jörgen builds a more realistic and human look at Cinderella and her circumstances, and then uses these scenes to both counterpoint and highlight the magical aspects of the story.
Glenn Davidson’s set design creates a fantastical environment based on the idea of the natural world reclaiming man-made structures. Inspiration for the set pieces is drawn from ice storms and old growth forests. Costume designs by Robert Doyle playfully echo each character’s personality.
Ballet Jörgen’s Cinderella is a classical ballet with modern, dramatic sensibilities.

When Annie’s husband, John, dies of leukemia, she and best friend Chris resolve to raise money for a new settee in the local hospital waiting room. They manage to persuade four fellow Women’s Institute members to pose nude with them for an “alternative” calendar, with a little help from hospital porter and amateur photographer Lawrence. The news of the women’s charitable venture spreads like wildfire, and hordes of press soon descend on the small village of Knapeley in the Yorkshire Dales. The calendar is a success, but Chris and Annie’s friendship is put to the test under the strain of their newfound fame.

Based on the true story of eleven WI members who posed nude for a calendar to raise money for the Leukaemia Research Fund.

“It makes you laugh, it makes you cry, and it leaves you feeling better about life than you did when you entered the theatre.” – The Telegraph

Have you ever wished to be someone else or to live a more glamorous and glorious life? The movie star life? These are Lucy's dreams and desires, but instead she is stuck working away in her lonely farmhouse diner. On this night, however, she is visited by a handsome and intriguing stranger while her husband is away. Does she want the exciting life this man promises or was she better off with the status quo? Think roaring 20s, think film noir, think suspense, think about seeing The Lonely Diner.

The Dangers of VD (Valentine’s Day)

Gramps and Gran yearn for the romance of their younger days while their daughter-in-law, Paulette,
and her husband, Henry, deal with his lack of interest in sex. Meanwhile, Paulette's daughter is being coached to dress in revealing clothing to attract men by her Aunt Jean who is a divorcee and secretly jealous of her sister’s long-term marriage.
Will Gran and Gramps come to terms with the challenges of senior sex?
Will Paulette discover why her loving, devoted husband can’t bring himself to be intimate with her?
Will the plan to have Jean date Henry work out the way Paulette hopes?

Peter and the Starcatcher

A wildly theatrical adaptation of Dave Barry and Ridley Pearson’s best-selling novels, the play was conceived for the stage by directors, Roger Rees and Alex Timbers, and written by Rick Elice, with music by Wayne Barker.

A young orphan and his mates are shipped off from Victorian England to a distant island ruled by the evil King Zarboff. They know nothing of the mysterious trunk in the captain’s cabin, which contains a precious, otherworldly cargo. At sea, the boys are discovered by a precocious young girl named Molly, a Starcatcher-in-training who realizes that the trunk’s precious cargo is starstuff, a celestial substance so powerful that it must never fall into the wrong hands. When the ship is taken over by pirates – led by the fearsome Black Stache, a villain determined to claim the trunk and its treasure for his own – the journey quickly becomes a thrilling adventure.

Featuring a dozen actors portraying more than 100 unforgettable characters, Peter and the Starcatcher uses the limitless possibilities of imagination to bring the story to life.

Peter and the Starcatcher runs from February 10 to March 11 2023 with evening performances at 7 pm and matinees at 2 pm. Show dates are added based on demand with Thursday through Sunday being available for purchase now. Student matinees are available based on school booking requests. Additional information can be found at https://www.storybooktheatre.org/peter-and-the-starcatcher

SUNNY SIDE UP – by Val Lieske
February 22-26, 2023
Engineered Air Theatre
When does life begin and who determines the starting line? Frank and Joanne consider their family’s future when confronted with embryos preserved in cold-storage. With the help of in vitrio they’ve already got twins and Joanne doesn’t want another pregnancy. Frank doesn’t want to ditch potential progeny. Frank’s mom thinks she knows what God has to say about it. What comes first, a person or their eggs? And what happens in ice-cold lockdown when larger than life embryos argue amongst themselves.
"Val is a very exciting writer who is able to tackle complex issues with wit, humour and passion. Her work is brave and unique." - Trevor Rueger, ED, Alberta Playwrights' Network

Based on the true story of eleven Women’s Institute members who posed nude for a calendar to raise money for the Leukaemia Research Fund. When Annie's husband dies of leukemia, she and best friend Chris resolve to raise money for a new settee in the local hospital waiting room.
They manage to persuade four friends to pose nude with them for an "alternative" calendar. The news of the women's charitable venture preads like wildfire, and hordes of press soon descend on their small village. The calendar is a success, but Chris and Annie's friendship is put to the test under the strain of their newfound fame.
By Tim Firth
Directed by Maree Okabe
Friday, Mar 10 - 7:30 pm Friday, Mar 17 – 7:30 pm
Saturday Mar 11 - 7:30 pm Saturday, Mar 18 – 7:30 pm
Sunday, Mar 12- 2:00 pm Sunday, Mar 19 – 2:00 pm
Tickets: $32.00

Theatre Alberta’s Playbill is a comprehensive listing of theatre companies and events from across the province!