The Great Whorehouse Fire of 1921 by Linda Wood Edwards

True story re-imagined about an enterprising madame and a town matron. A story passed down in local histories, of a group of townswomen who banded together to defend their families by burning down the brothel.

Florence Smith: owner of a boarding house that specializes in pregnant single girls
Isobel Hastings: owner and proprietor of the Brothel 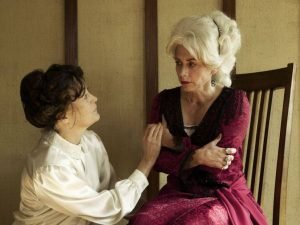 A house occupied and owned by a woman named Hastings who was living a mile and a half north of town was totally destroyed by fire at 4:30am on Monday morning. The cause of the fire is unknown. The occupants had a very narrow escape, as when they awoke the house was full of smoke and fire. Nothing was saved and the loss is estimated at $4,000. [about $50,000 in contemporary funds]. The Hastings woman and another person who was staying with her had to walk into town clad only in night attire with blankets over them, and had a terrible time from cold and exposure. The police are investigating the affair.

But there was no investigation, no charges laid. Hastings disappears from annals of Big Valley, Alberta. A story passed down in local histories, of a group of townswomen who banded together to defend their families by burning the brothel to the ground. But we found no records linking the action to any specific women. So we made this up.

Productions: This drama with comedic themes (or comedy with dramatic themes) was first produced at the 2018 Edmonton Fringe. Linda Grass starred as Smith, and Sue Huff Starred as Hastings, with David Cheoros directing. The run was produced by Maa & Paa Theatre, which focuses on stories from Alberta’s history. All eight performances were sold out.