The mandatory psychological assessment of a corporate CEO does not go according to plan.

Setting: Modern day; a counselling office within a corporation 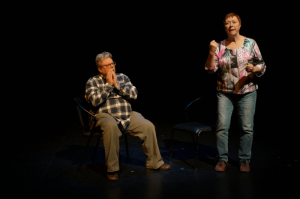 Inspiration: The playwright is unashamed about her love of the Teletubbies. She thinks organizations would run better (and life in general would be more pleasant) if people followed a Teletubbies lifestyle. This short play shows how it might impact a large corporation. Big hug!

Productions: The play was first performed at Theatre Canmore’s 10-Minute Play Festivus: Theatre for the Rest of Us (March 2018). Judy McFerran starred as the CEO and David Cheoros starred as the psychiatrist. Laura Raboud directed this Northern Sabbatical Productions offering.