Home » Library » eScripts » With Bells On by Darrin Hagen

With Bells On by Darrin Hagen

Home » Library » eScripts » With Bells On by Darrin Hagen

He is a mild-mannered accountant with persistent bad luck who heads out for his first night of adventure after a nasty divorce. He holds the door for “She”, a 7-foot Glamazon who lives down the hall, who has “decked the halls” by creating the Ultimate Christmas Queen Pageant Outfit. They begin what should be an uneventful ride down to the main floor lobby.

But then the elevator gets stuck. And the unlikely duo is forced to work together to escape. The stakes are as high as her sparkly head-dress – “She” needs to be onstage by midnight, or relinquish her claim to the crown.

With Bells On is a Christmas comedy for people who feel excluded from traditional Christmas entertainment.

WITH BELLS ON
Production/development history 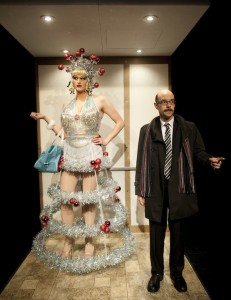 May 2009: Commissioned by Lunchbox Theatre’s Suncor Energy Stage One Festival

With Bells On requires 2 actors – one as tall as you can find (“She”), the other a more normal height (He).

The sound design by Darrin Hagen is available for a reasonable design royalty. 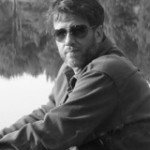 Playwright Bio: Darrin Hagen is an award-winning playwright, composer and drag artiste. He is the author of The Edmonton Queen, which won a Sterling Award and was published in book form by Brindle & Glass Publishing. Darrin is the Artistic Director of Guys In Disguise, which recently celebrated a quarter-century of creating drag comedies that have toured across North America. He has received 7 Sterling awards for his work in the Edmonton theatre scene. Other plays by Darrin include Buddy (nominated for Outstanding New Play); With Bells On (nominated for Outstanding New Play); BitchSlap!; The Neo-Nancies: Hitler’s Kickline; Tornado Magnet: A Salute to Trailer Court Women (published by Brindle & Glass); PsychoBabble and Dragula (both co-written with Trevor Schmidt); PileDriver! (co-written with Wes Borg); Men Are Stoopid, Women are Cra-azy (co-written with Chris Craddock).

Darrin has also directed and curated the legendary Loud & Queer Cabaret, which recently had its 20th anniversary, and is the editor of Queering the Way: The Loud & Queer Anthology, a collection of many of the writers that had been mentored by this unique event.

In 2005, Hagen was named one of 100 Edmontonians of the Century. To the best of his knowledge, he’s the only Drag Queen on that list.