More Than a Number by The Seniors Acting Lab

5 card-playing friends find them immersed in a sometimes hilarious and sometimes tragic discussion about ageism and how it affects each one of them personally.

This one-act original play was created and written by a team of individuals for the June 2019 FLC Acting Club’s Performance during Seniors Week. As the theme of Seniors Week was ‘ageism’, the play was written specifically to explore that subject. It was performed to two almost sold out audiences at Lunchbox Theatre.

During the summer of 2019, the play was rewritten with the support of dramaturge Trevor Rueger from the Alberta Playwrights Network. We then approached the Calgary Arts Development for a grant to take the play on tour as an independent theatre group called the Seniors’ Acting Lab. We have just recieved the grant funding and have booked 6 separate venues throughout Calgary to perform the play during the 2019 -2020 season.

After each play, we encourage a discussion about whether or not audience members think ageism actually exist in their lives and what form it might take.

Hopefully, this play is the beginning of a series of plays written and produced by the Seniors’ Acting Lab that deal specifically with seniors issues. 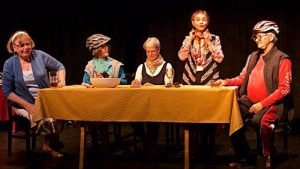