In this fresh, fun, and lively adaptation of A Christmas Carol you’ll meet Mr. Bentley, learn about the letters Scrooge wrote to his sister Fan, and find out who Mr. Newbury is. You’ll still find all the ghosts of Christmas Past, Present and Future along with Tiny Tim, Bob Cratchit, the Ghost of of Jacob Marley, Old Fezziwig, Scrooge’s nephew Fred, and the love of Scrooge’s life, Belle. There are some scary bits, a few good laughs, a tender moment or two, and some surprises! It’s a fresh take on an old tale sure to thrill young and old alike. 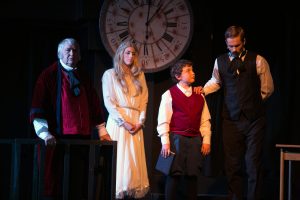 Story: When Scrooge’s nephew Fred returns letters Scrooge had written to his sister Fan long ago the past is unlocked, and Scrooge learns how his fear of poverty and pursuit of wealth cost him a chance for love and genuine happiness. 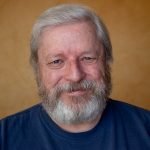 Playwright Bio: James Hutchison writes comedies, dramas, and mysteries. In addition to his original adaptation of A Christmas Carol, James has written “What the Dickens!” a full-length comedy about the Pine Tree Players’ production of A Christmas Carol where everything goes wrong. You can visit his website at www.jameshutchison.ca where you can download all his plays for free and read his blog where he interviews other actors, directors, and playwrights.