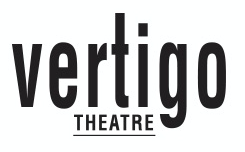 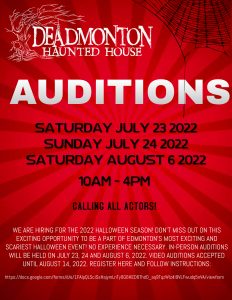 Deadmonton Haunted House is hiring for the 2022 season! For more info visit our events page on FB!

With support from the RBC Foundation, Theatre Alberta is thrilled to offer these monologue coaching sessions to Emerge and recent Artstrek participants. We have some incredible Albertan artists offering their time to help you polish your audition pieces. Please look over the instructions below, check out the coach bios, and book your appointment.

Registration for the audition coaching sessions is now closed.

Focus: Shakespeare, Text
Pat studied Voice and Speech at York University. She has taught Voice at University of Alberta, Concordia University College and Canada’s National Voice Intensive. She is an award-winning artist and a graduate of the University of Alberta’s BFA Acting and MFA Directing programs. patdarbasie.com

*NO TIME SLOTS AVAILABLE*
Focus: Canadian Theatre
Tai is Métis, Cree, and Haudenosaunee from Ardrossan, Alberta. She was awarded the Métis Nation of Alberta's award for Outstanding Youth of 2020 for the work she is doing to unravel the stories of Métis women in her family (the Callihoos). Tai is an artistic associate at Savage Society and an associate artist at the Citadel Theatre. She recently adapted Mary's Wedding: A Métis Love Story and plays Mary in Citadel Theatre's production. Tai is currently working on commissions with Nightswimming (Wiwimaw), Axis Theatre Company (Where did all the buffalo go…), and the Arts Club Theatre Company (My Father is the greatest man in the world). Selected Acting Credits include: Honour Beat (Grand Theatre) and Thanks For Giving (Arts Club).

Focus: Shakespeare, Realism, Contemporary
Ian is an Edmonton-based actor and director and founder of theatre no. 6. He also teaches a Shakespeare acting class at the University of Alberta Department of Drama. His recent acting credits include The Blue Hour (SkirtsAfire Festival), Slight of Mind (Theatre Yes), Exit the King (Studio Theatre), Our Man in Havana (Bright Young Things), Pugwash (Ship's Company Theatre), and Stupid F**king Bird (Edmonton Actors Theatre). Directing credits include The Other Side of the Pole for Prime Stock Theatre in Red Deer, The Tempest for the University of Alberta Department of Drama, and Proud, The Fever, and his own play U: The Comedy of Global Warming for theatre. no. 6.

Focus: Anything but Musicals
Julie is a Calgary-based performer who has been recognized with three Betty Mitchell Awards, an AMPIA award for Best Performance by an Alberta Actress and two Calgary Theatre Critic Award nominations. As an actor, she has performed in over 50 productions on every major stage in the city and a few more across North America.

Registration for the audition coaching sessions is now closed.

Deadmonton Haunted House is hiring for the 2022 season! For more info visit our events page on FB! 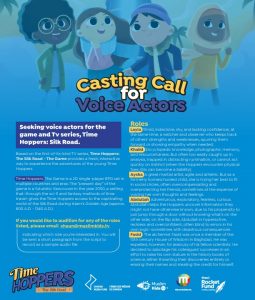 Muslim Kids TV is looking for 5 voice actors for the game and TV series: Time Hoppers: The Silk Road