Who Are We Now? Theatre Alberta Essay Series – Postmarginal

Who Are We Now? Theatre Alberta Essay Series – Postmarginal 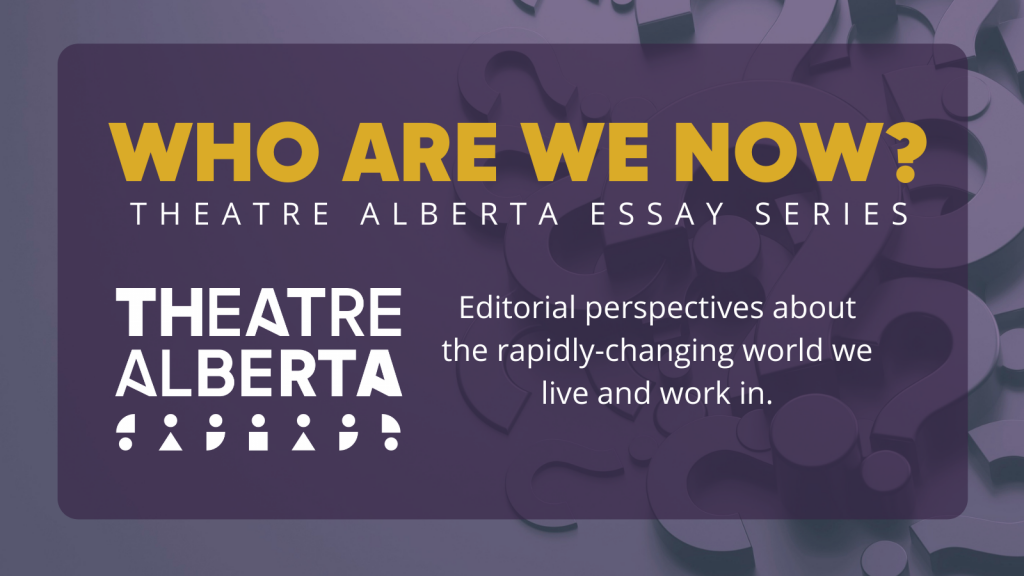 Postmarginal Edmonton – Reflections of a Year

A little over a year ago, 40 artists, scholars, and cultural workers gathered at the Fringe Theatre Arts Barns in Edmonton to tell stories, dialogue, move, and practice together. Led by Walterdale Theatre with funding support from the Edmonton Arts Council, the Edmonton Community Foundation, and Theatre Alberta , the goal was to generate new ideas for a more inclusive theatre community in Edmonton. You can find out more about the genesis and process of the project on its website here: postmarginal.ca/en/edmonton

At the end of the three-day retreat Mũkonzi Wa Mũsyoki, one of the participants, made a comment that resonated with our experiences from this and other Postmarginal events. He said that in the final day of the retreat several participants remarked that they were looking for a product, a takeaway, something to make their work in Diversity, Equity, and Inclusion easier. He told them: “The product is you. If you don’t change, nothing else will.” Following that trail of thought, we recently caught up with Soni Dasmohapatra, Lucy Lu, and Shrina Patel to see if and how Postmarginal changed their practice or their thinking.

Postmarginal provided the space, through our bodies and in conversation, to explore the subtle influences of the oppressive practices and social systems that maintain the dominant narrative in the theatre. As people of colour, our work to bring our voices to the centre is constant and continues beyond Postmarginal and beyond structured conversations. It is the fabric and connective tissue of our being. 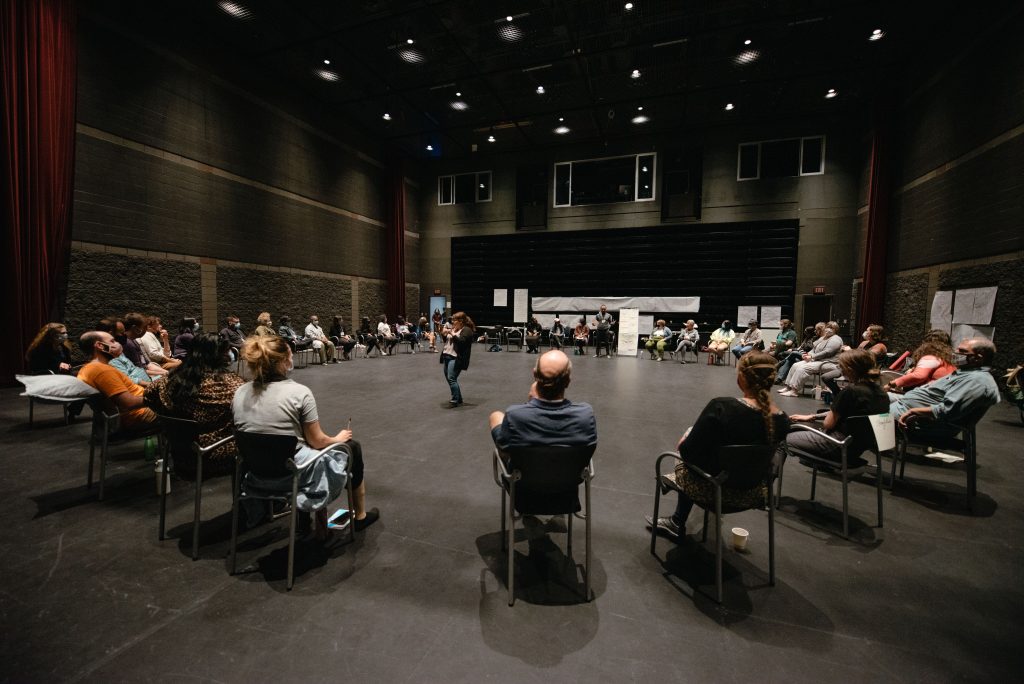 How is the occupation of space organized?

Who gets to feel free when white face constantly surrounds me?

Can I truly belong or do I create new pathways in the margins?

As a network of oppressive practices and social systems

Stories that get centred

Stories that fall to the margins

In September 2021, as pandemic restrictions were slowly being lifted across Edmonton, artists were hesitantly mingling with others as we gathered in community at the Postmarginal retreat. This event was met with curiosity and uncertainty.

To witness, to listen, and to be engaged in the art of storytelling is to understand and embody the human experience. Local artists like Shrina Patel, Mũkonzi Wa Mũsyoki, Brooke Leifso, Chris Dodd, Josh Languedoc, Jesse Del Fierro, Todd Houseman, and Lady Vanessa shared stories with honesty and integrity. The sharing of these chronicles highlighted the complexity of artistic creation in a place like Edmonton. 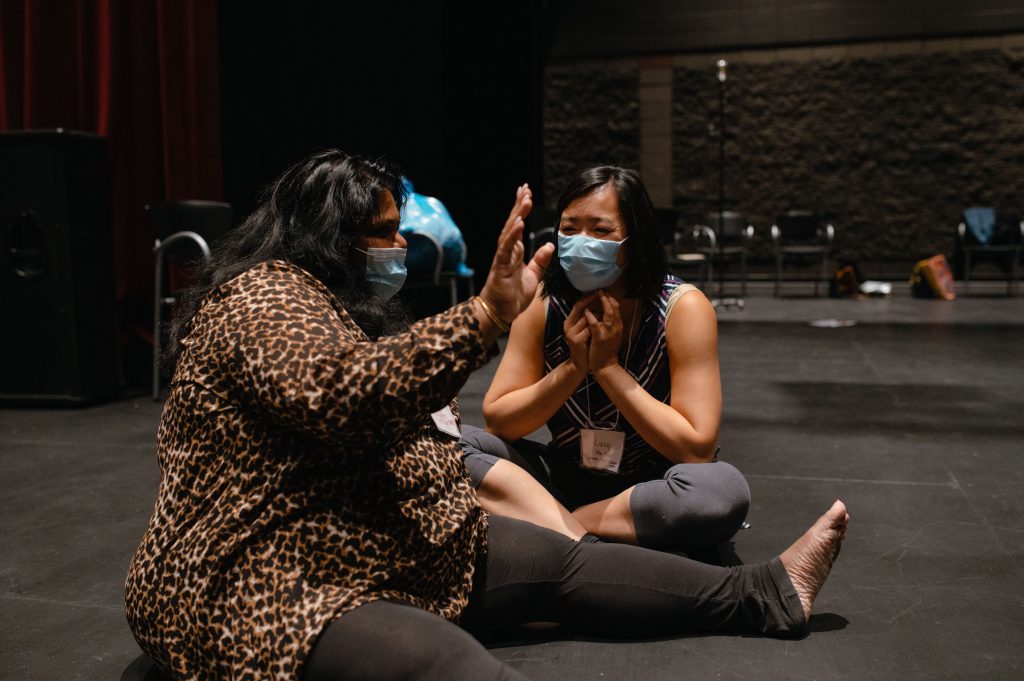 The tales weaved by all these artists showcased both individual and collective resistance to the colonial and capitalist structures that value and elevate Eurocentric, able bodied, and commodified forms of art as the dominant narrative. Overall, the retreat demonstrated how far we are from a state of post-marginality. Rather the retreat emphasized the margins that artists continue to create and be in, as there are limited spaces available in mainstream arts spaces that welcome these marginal artistic renderings. Art Babayant’s multilingual dramaturgy session gave us the opportunity to explore moving through the margins; specifically, it gave form to the inquiry into leaning on languages other than English for expression. It was so powerful as it manifested in both speech and movement as a liberating performance.

Exploring the Limits of Self and Other

We took part in Meryem Alaoui’s somatic workshop to explore the limits of ourselves and those of others. As a creative arts therapist, this somatic and experiential process of working through the body and our art is a familiar, nourishing part of my practice. It is this kind of experiential practice at Postmarginal that I appreciated after moving our work online during COVID and cobbling a proxy of our theatre work through the Zoom platform. It brought me back into my body, where I live as a person of colour. In our Thirdspace Playback Theatre group, we work on the margins to explore and centre spaces for stories of Indigenous, Black, and People of Colour and I feel like I am always exploring what these limits of self and others are.

Meryem led us in a gentle way to notice the fascia network, the subtle connective tissue that holds our bodies together. To feel something so subtle can be elusive and at times insightful and eye-opening, yet it became more apparent when we brushed up and came into contact with another person. Postmarginal offered a space for us to connect to this connective tissue that is in our bodies and also in the body of the theatre world in Alberta. 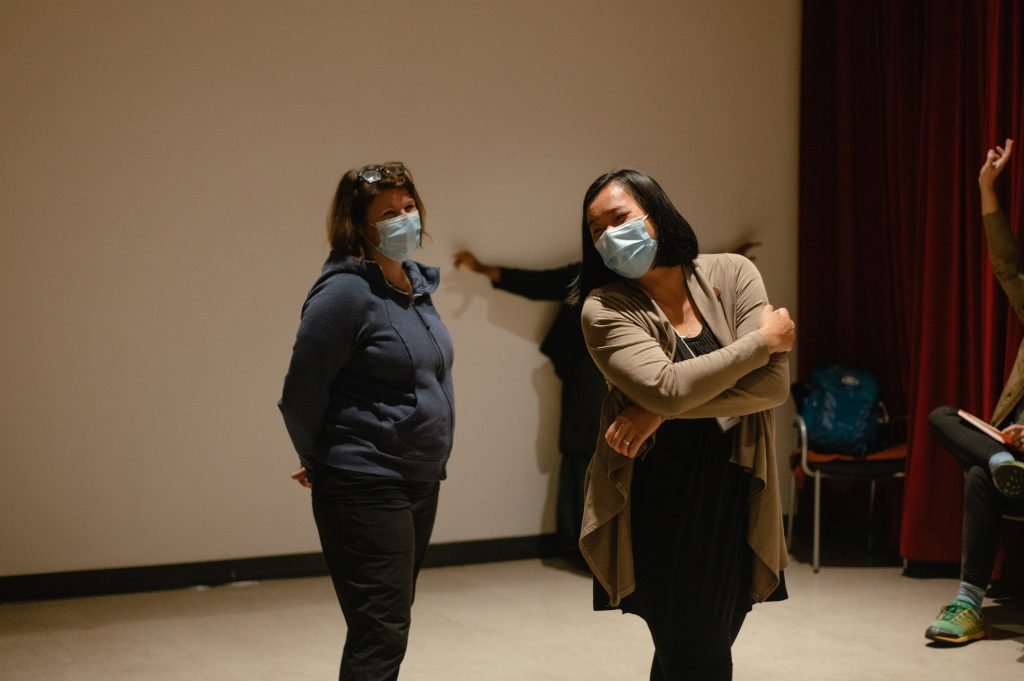 Since Postmarginal, I have been working together with mainstream theatre practitioners and people from traditionally marginalized communities to further the ideas that were germinated at the retreat as a part of Theatre Alberta’s Engagement Lab. The process has been slower and more in the head than I would like. Yet there is a subtle movement towards connection, similar to the workshop experience. I still feel like I am navigating this sensation and experience of connecting to this subtle connective tissue that resides in my body — a body marked by subtle and not so subtle forces of oppression and privilege, of spaces of silences and stories.

Since the retreat, I have faced challenges and successes with harvesting the seeds planted in Postmarginal. My application was rejected to take part in Theatre Alberta’s Engagement Lab process, which was upsetting to me at the time. However, as the saying goes, when one door closes others open. I had the most amazing connection with many people who attended the retreat. And as a result of these new networks, I am a sessional instructor at the MacEwan University Arts and Cultural Management Program. I have created a land acknowledgment in Hindi which included co-creation of a dance production with Shrina Patel for the National Asian Heritage Month Symposium 2022. I continue to create artistic expression with Thirdspace Playback Theatre. My somatic coaching is expanding. The tools built from this retreat influence and impact my work as Vice President of Azimuth Theatre’s Board of Directors.

The Postmarginal retreat brought together artists from diverse backgrounds to explore theatre aesthetics and practices in a manner that is new to the Edmonton art scene. The most important component of the Postmarginal model was established by a question on day one:

“How can we create a space of transparency in which all participants felt safe to share their experiences?”

As a South Asian artist residing in Edmonton, Treaty 6, I didn’t have the opportunities or the success I was hoping for after graduating from Drama school. It was challenging to find auditions that were casting BIPOC actors, and I lost a lot of confidence. I began to question how we could create spaces that acknowledged and represented the diversity of artists residing in Edmonton.

I witnessed my peers auditioning regularly, building momentum in their acting careers. This wasn’t easy for me, and I stopped networking within the theatre community, focusing instead on creating a space that showcased local BIPOC talent. I began to write, direct, and produce work through Shaktiflow that spoke to the diversity in Edmonton. 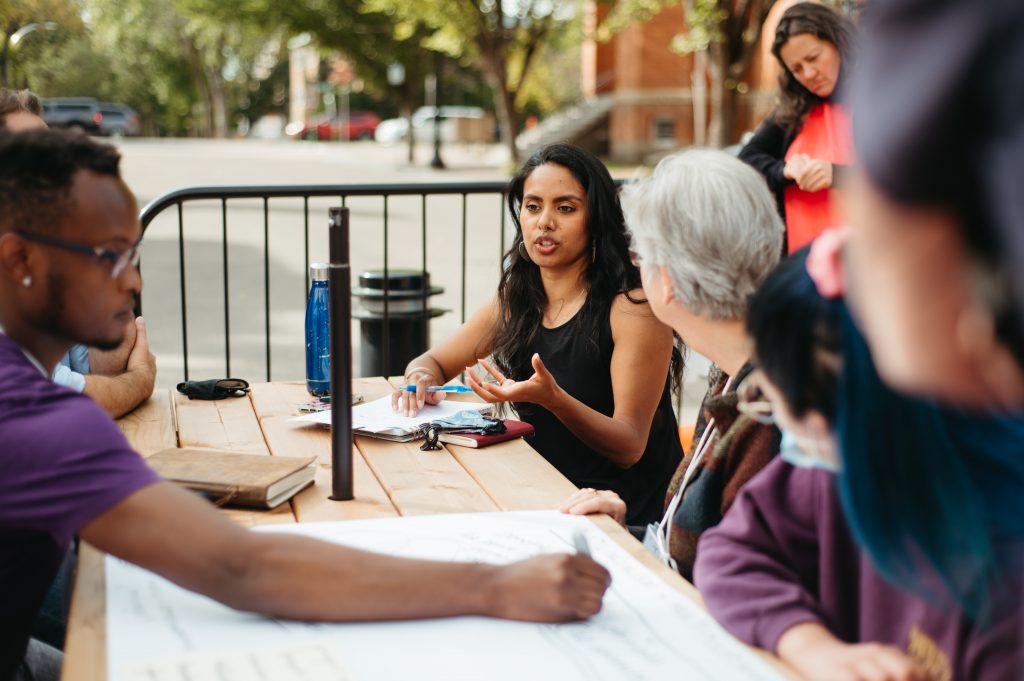 Though it was rewarding, finding space in mainstream organizations (with mainstream audiences) was challenging. As an artist, being seen and acknowledged is a necessary part of growth. And to achieve this and create awareness about South Asian arts, I found myself accepting offers for performance as a space filler and/or for exposure with little to no compensation. Unfortunately, this issue is all too common for BIPOC artists and is rarely addressed out of fear of being seen as “too much” or a troublemaker.

The Postmarginal retreat approached this concern with compassion and addressed the issue without alienating anyone. Not only was I seen, but I was given the space to voice my concerns for the first time in a space with organizational leaders from theatre houses and felt heard.

Postmarginal’s impact has been significant. I developed new networks and connections, which has presented new opportunities. Since the Postmarginal retreat, I have received parts for future theatre productions and I worked with both the Citadel Theatre and Alberta Musical Theatre as a Dance Choreographer — something that I never fathomed could be possible coming from a South Asian arts background.

It has been a blessed journey and I’m incredibly grateful to have been invited to Postmarginal. Creating these networks has opened doors for me where there used to be walls. Postmarginal challenged participants to conversationally step into experiences faced by the minorities in the community and sit together to reshape contemporary theatre spaces with a voice and vision of inclusivity. I hope to see and be part of more retreats in the future: there is a momentum that has begun, and we should see it through. 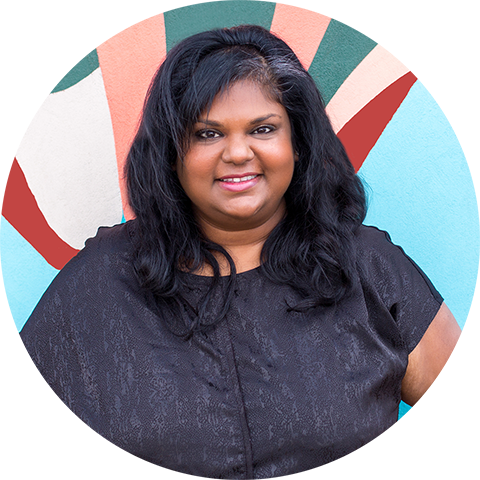 Soni Dasmohapatra is a passionate consultant, educator and arts practitioner who uses yoga and somatics as pathways of self discovery, healing and artistic creation. (www.sonidasmohapatra.com) Soni has built her career for over twenty years in the sectors of government, higher learning, non-profit, public education and philanthropy, across Canada and Internationally. Currently she is a sessional instructor at MacEwan University, Arts and Cultural Management Department. Soni, has a Bachelor of Arts from the University of Alberta, a Masters in Public Administration (MPA) from the University of Victoria and a certificate in gender studies and human rights from Oxford University, UK.

Lucy Lu is a Chinese-Vietnamese Canadian practicing as an Art Therapist, counselling therapist, and artist currently based in amiskwacîwâskahikan/Edmonton. She is the Artistic Director of Thirdspace Playback Theatre Edmonton and facilitates community dialogue and storytelling with culturally diverse communities through this form of improvised and participatory theatre. Her use of Playback Theatre in therapeutic and community settings merges her love for embodied listening, storytelling, and facilitating and providing space for the stories of marginalized communities. https://www.thirdspaceplayback.com/ 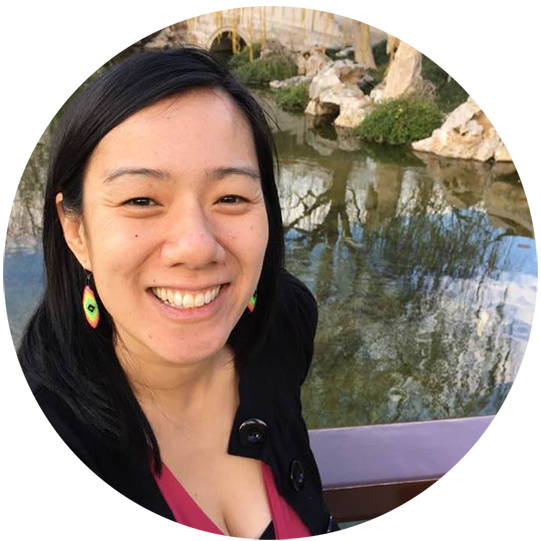 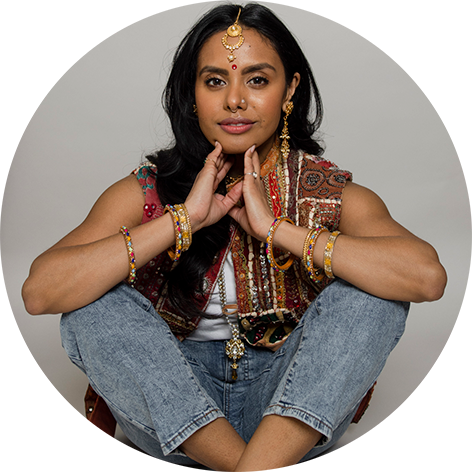 Shrina Patel is a multidisciplinary artist and the Artistic Director of Shaktiflow residing in Amiskwacîwâskahikan Edmonton, Alberta. Her/their work is based on story-telling with a focus on socio-cultural and gender inequality. For over two decades, they have collaborated with many local artists and organizations within and surrounding Treaty 6, to provoke conversations that challenge the traditional social norms people face based on their gender, race, and ethnicity. In 2019, she produced and directed her first show entitled Sacred Spaces at the Arden Theatre; a conversation about consent, safety, and resilience. Her background in theatre and unique signature choreography is showcased in collaboration with Citadel Theatre, Alberta Musical Theatre Company, and Alberta Theatre Projects. Weaving activism with movement Shrina’s artistic work, at its core, holds conversations of injustice and healing, which they lovingly refer to as Artivism. These days Shrina can be found exploring resilience through mindful inclusive movement.

Postmarginal is an artistic movement that sees inclusivity as a creative opportunity in the theatre. Postmarginal experiments with artistic practices and rehearsal processes that are inspired by the pluralism of cities and regions. Postmarginal believes that all cultural backgrounds, physical/mental differences, and gender identities can fuel a new approach to theatre. Through three streams of activity, Postmarginal explores the creative potential of artists, the mobilization of the community, and the relational ethics of inclusion in the performing arts. Postmarginal has developed a new website, http://centrecannothold.com/, based on the artists and the experiences Postmarginal has facilitated across the country – If you’re interested in working across barriers, check it out. Postmarginal also took the opportunity to conduct qualitative analysis of the text and themes that were generated during the September 2021 Edmonton retreat. You can find that report on their website at postmarginal.ca/wp-content/uploads/2022/10/Postmarginal-Edmonton-Report.pdf.

*All photos credited to Brianne Jang of BB Collective, courtesy of Postmarginal.