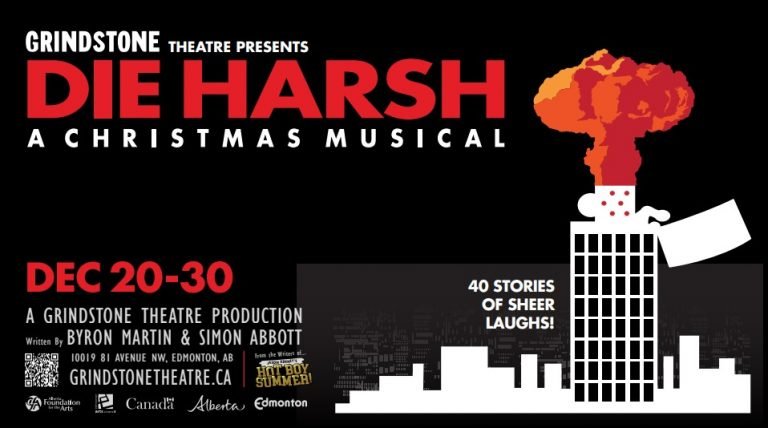 ABOUT THE MUSICAL
Sexy German criminal Alan Rickman-I-mean-Hans-Gruber leads an international gang of terrorists who seize an office tower during a Christmas party. John, a cop from New York, is trapped on the upper floors. He’ll need a Christmas miracle to save his power-dressing wife Holly and the other hostages.

ABOUT GRINDSTONE THEATRE
Grindstone is an improv-based theatre company in Edmonton. The Grindstone wrote and produced Jason Kenney’s Hot Boy Summer The Musical, taking it on tour across Alberta, as well as the disturbingly popular Thundercats: The Musical for the 2019 Fringe. Other mainstage productions include the award-winning improvised musical The 11 O’clock Number, Urinetown The Musical, The Adventures of Chucky and Reggie, Here Lies Henry, The Complete Works of Shakespeare Abridged, HONK! The Ugly Duckling Musical, and Shakespeare’s Henry V.

Additional information:
To submit your interest, email your resume and headshot to Byron at bmartin@grindstonetheatre.ca. Please write “Die Harsh Audition” in the subject line. In an effort to reduce paper consumption, we accept online submissions only.
Auditions will consist of a comedic monologue, and a verse and chorus of a musical theatre or comedic song. We are not accepting video submissions at this time. Only actors selected for an audition will be contacted and given an appointment.

NOTE: All roles will include dancing and group movement. Improv and Sketch performers are encouraged to apply.
Grindstone Theatre is committed to inclusive casting. We encourage submissions from professional artists who self-identify as members of under-represented communities.