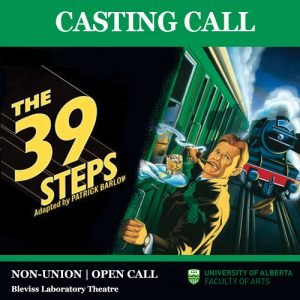 INSTRUCTIONS
Please send headshot and resume for consideration. Subject of email should be “The 39 Steps/Role of __________” (and list the role you are submitting for)
Deadline: Friday, Sep 23, 2022

DIRECTOR’S NOTE: In this production of The 39 Steps, we are looking to bridge hitchcockian homage, theatrical python-esque madcap and rigorous invention into a story of mystery, perseverance and partnership. Barlow’s telling moves at breakneck speed- yet we will not forsake the beating heart at the centre of the thriller: that regular people, in crises, together, are capable of saving the world. In this production, we are looking at undermining dusty, especially “femme,” tropes, rather than “falling victim” to them. The given circumstances embrace the mysterious and obscene, requiring a company that isn’t afraid to risk and play hard, embrace the ridiculous and unusual, and listen together beautifully. As collaborators, we are building a new path to The 39 Steps, while never losing a hilarious theatricality or emotionally resonant core.