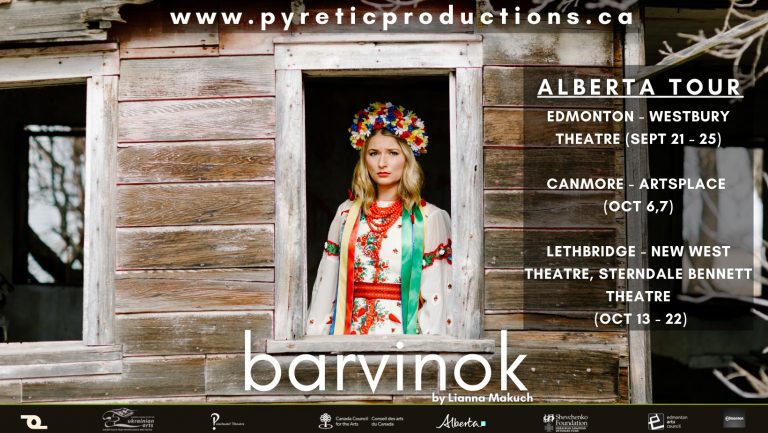 Barvinok by Ukrainian Canadian playwright Lianna Makuch, is inspired by personal accounts from war-torn Ukraine in 1944 and true stories from the country’s ongoing war. Set in 2017, just 3 years after the Russian invasion in 2014, Barvinok weaves traditional polyphonic Ukrainian folk music (arranged by music director Larissa Poho) and dramatic storytelling to tell a personal story of war and intergenerational trauma. It offers a rare window into the human stories of resilience behind the unimaginable experience of war, both past and present.

This award-winning production returns to Edmonton after a sold out run in 2018. Since then, it has been further workshopped in Kyiv, Ukraine and had a sold out run in Toronto in 2019. Now, the play is going on tour across Alberta, and the production is kickstarting it all with a homecoming performance in Edmonton.

Hania’s Baba has a secret. A secret she’s bringing with her to her grave.

Since moving into the long-term care centre Hania’s grandmother has been restless. She’s agitated. Something from her past is haunting her. She desperately asks Hania to return to their Ukrainian homeland and seek out a missing piece of their family history. Hania’s search brings her to the edge of the ongoing war in Eastern Ukraine.

Barvinok — the Ukrainian word for “periwinkle, a symbol of strength and eternity — was celebrated by former MP Linda Duncan in the House of Commons as “the most powerful presentation [she has] seen of the long history of struggles that the people of Ukraine have suffered.” The play is inspired by the experiences of the playwright’s grandparents who fled Ukraine during WWII, and true accounts of people interviewed in conflict zones in Eastern Ukraine. Playwright Lianna Makuch comments that “this story is a window into the human impact of war. The play takes place in 2017, but it is more relevant than ever. It allows the audiences to gain a deeper understanding of our world’s current circumstances with Russia’s brutal invasion of Ukraine in 2022.”

A portion of ticket sales will be donated in support of Ukraine.
Info and Tickets: www.pyreticproductions.ca