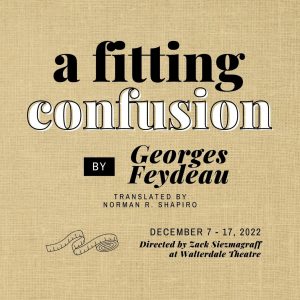 Play Synopsis:
Affairs of Lust and Laughter!
In chic 1930s Paris, a society doctor Moulineaux is desperately trying to conceal his attempted affair from his new wife. One hilarious confusion follows another as his meddling butler, angry mother-in-law, bumbling friend, a misplaced wife, another cheating husband, an absent dressmaker, and the Queen of Greenland add to the entanglements. “A Fitting Confusion” is a sparkling masterpiece of French farce complete with mistaken identities, fast and furious complications, and multiple sets of slamming doors.

Characters:
Walterdale is committed to diverse, inclusive casting. For every role, the director will consider all submissions. Ages ranges are approximate and somewhat flexible.

Audition Requirements:
You will be auditioning in small groups on Zoom in a 45-minute slot in which you will be asked to read sides from the play (you will receive the sides before your audition).
Callbacks will be held in person , date and time TBA.

To book your audition, please sign up here: https://www.signupgenius.com/go/10C0E4BA4A628A2F5C43-afitting

Prior to your audition, you will be sent an online form for completion to gather more information, including your headshot, resume, and any potential conflict dates you have with the rehearsal and performance schedule

If you are unable to make the audition dates, we will also accept recorded auditions. Please email the director to make the necessary arrangements for these.