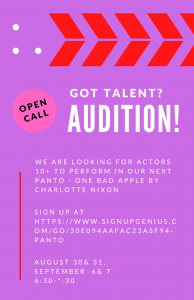 One Bad Apple: The Queen, Snow White and the Evil Red Delicious
An Original Comedy based on the tale of ‘Snow White’
Written by: Charlotte Nixon

Synopsis
“There are two sides to every story and it’s about time the Evil Queen got to tell her own version of the tale! One Bad Apple: The Queen, Snow White and the Evil Red Delicious is a new twist on the classic fairy tale. In this hilarious, witty and over the top comedy we find out the real reason why the Evil Queen has such a hate on for Snow and her little woodland friends. This play has it all; mistaken identify, slap stick pranks, heroic deeds, and of course a sprinkle of inner rage. One Bad Apple will have you wondering; What are you willing to do to be beautiful?”

Take A Bow Community Theatre invites everyone ages 10 and up to audition: www.takeabow.ca