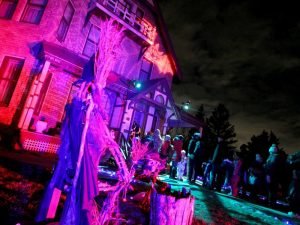 THE GAME OF “LOVE AFTER LIFE”
“Will Charles Bones find love after he finds out he’s dead?”

STILL GHOSTBUSTING
“The Ghostbusters are trying to capture spectres at Heritage Park, but things go awry when the Lady in White appears.”

PAT: Ghostbuster, the funny one

EVIE: Ghostbuster, the smart one

LADY: the Lady In White ghost of Heritage Park

ARMY OF POSSESSED ACTORS: any number of people

THE ADDAMS’ FAMILY HOUSE GUESTS
“The Addams Family have some not so nice house guests while Wednesday tries to protect the family’s heirlooms.”

MEET & GREET CHARACTERS
Various Mascot-like Characters to meet kids, talk and take photos with them.
Directed by: Trevor Matheson
Performed: In Various Locations Around The Park

PERFORMANCE INFO:
Call time will be one hour before the event.
Specific showtimes for each show TBA

Persons submitting must be available for all performance dates. No exception.

Auditions will be held at Heritage Park.

Only those selected to audition will be contacted with an audition time. Heritage Park is committed to diverse, inclusive casting. Ghouls’ Night Out is a volunteer performance contract and actors will be considered volunteers of Heritage Park. Equity members will not be seen at these auditions. Thank you for your understanding.