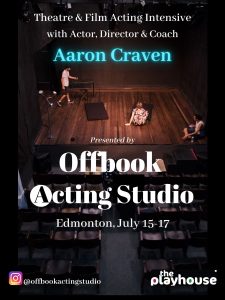 We are excited to bring back Vancouver acting coach, Aaron Craven for another weekend intensive.

Last workshop sold out within 2 days.

This is a rare chance to work with one of Vancouver’s Premier actors who runs his own acting studio and theatre company, Mitch & Murray Productions. More importantly, Aaron is a working actor in film, tv and theatre for over 20 years. Aaron brings extensive screen and stage experience to his classes, as well as the perspectives of a writer, director, and producer. Learn from a guy who truly has done it all!

In this class, you will receive more than 15 hours of classroom work with Aaron.

The workshop will include Q and A about the industry in 2022, improv warmups, on-camera audition work and partnered theatre work in an intense 3-day workshop

**This is an intermediate to advanced level class extremely focused class and to ensure the quality of work and focus on you as the actor. Resume and/or Demo reel may be required to determine eligibility.
$315 – Gst incl.

Aaron Craven is one of Canada’s most recommended acting coaches and his classes at The Working Actors Gym in Vancouver regularly have full attendance and have a wait list all year round.

Aaron is the founder and artistic director of Mitch and Murray Productions, a Vancouver-based theatre company. A graduate of the University of British Columbia, Aaron has been a busy screen actor in Canada and the USA for two decades. TV credits include recurring roles on iZombie, Travelers, The Bletchley Circle: San Francisco, Somewhere Between, Ties That Bind and Gracepoint. Features include The Dresden Sun, Tim Burton’s Big Eyes, The Predator, The Age of Adaline, and The Atticus Institute. He’s also directed several short films which have played in festivals worldwide.

Stage credits for Mitch and Murray Productions include: Snowflake (Jessie award nominee for best lead performance), Lungs, Smart People, Detroit, Speed-the-Plow, Becky Shaw, Race and Fifty Words (acting) and Body Awareness, Sex With Strangers and Rapture, Blister, Burn (directing). Other credits include Gaslight at the Hudson Theatre in Los Angeles and Wilde Shorts at Chemainus Theatre. As a writer, Aaron is premiering his first play, Instantaneous Blue this January in Vancouver and he’s currently in development for a TV pilot.

His experience in all these disciplines informs Aaron’s approach as an acting coach. He brings a precision of direction and a keen eye for performance, script analysis and creative possibilities to his dynamic classes at The Working Actors Gym in Vancouver.

“I love Aaron’s honest, straightforward approach. His passion and knowledge for the craft are contagious and his coaching skills are so beneficial in the auditioning process. I was truly impressed with the level of talent. I would highly recommend his training to any actor” (Jackie Lind – Emmy Award winning Casting Director)