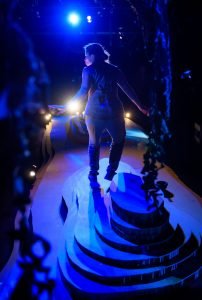 Verb Theatre is seeking applications from Calgary-based, early career theatre artists interested taking our company into the next chapter of its adventure in an Artistic Leadership Role (Artistic Director/Producer/Team). The ideal candidate(s) are brave, curious, empathetic, ambitious, forward-thinking artists with a passion for telling cutting edge stories in innovative ways, and who are excited about the opportunity to use the existing resources of Verb Theatre to grow the company, expand its artistic impact, and champion the mission and values of the company to the community.

Verb Theatre is an equal opportunity employer that welcomes applications from artists of all backgrounds, regardless of gender, race, sex, ethnicity, ability, and political affiliation.

At Verb Theatre our mission is to provide for our audience theatrical experiences that explore cutting edge ideas in innovative ways. We start conversations today that will be important to our audiences tomorrow with our surprising, important, and evocative performance.

Verb Theatre was founded in 2009 by Jamie Dunsdon who served as Artistic Director until 2022, along with the support of Artistic Associates Shea Heatherington, Kiana Wu, Anna Cummer, Col Cseke (who also served as Co-Artistic Director from 2010 – 2016), and Jessica Robertshaw. During that time, Verb focused on producing contemporary plays from both Canadian and international playwrights, and has proudly produced multiple world premieres. Some of our past productions include: Bliss (The Birthday Party Play), A More Sparkling Version of Ourselves, The Wolves, Blackbird, Easter Island, Sextet, Lungs, The Fight or Flight Response, Jim Forgetting, Marg Szkaluba (Pissy’s Wife), and many more.

Verb Theatre is incorporated as a Not-for-Profit Society under the Alberta Societies Act, and a Charitable Organization through the CRA Charities Directorate. The Artistic Director reports directly to the Verb Theatre Society Board of Directors.

Verb Theatre receives operating funding from the Alberta Foundation for the Arts (CPAO Stream) and Calgary Arts Development (Professional Theatre Stream), as well as Casino Funding through the AGLC. It is also eligible for support from multiple foundations and other granting bodies. The new Artistic Leadership will inherit sufficient funding to program their own season of work.

Since 2009, Verb Theatre has been a founder-led, project-driven organization and are now transitioning to the next phase of Verb’s growth which will see a new team take over the Verb Theatre mission in their own way. We are open to considering a few different models for the new leadership structure, and encourage applicants to pitch the model they intend to use in their cover letter.

Applicants may apply as:

A Pair (as Co-Artistic Producers, or, an Artistic Director and Executive Director Team)

Salary: $20,000 is the starting salary for this position, however there a small amount of room for flexibility if the position is shared between a pair or team. The artist(s) may receive additional fees for participating in individual productions (eg. a separate directing fee). Our hope is that this position will become more full-time in the years to come.

Why are we seeking “early career artists?”

Verb Theatre has always placed mentorship among its core values, both as mentors and mentees, and simply put: we don’t feel there are enough opportunities for emerging leaders to put their leadership skills to the test. Most new theatre companies shut down before they reach the 18-month mark due to the countless barriers faced when starting new companies (lack of knowledge of how to start a non-profit/charity, the wait time needed to be accepted into operating grant streams and AGLC funding streams, lack of new company infrastructure, lack of seed funding, etc.), and having battled each of those dragons ourselves, we at Verb respect just how daunting they can be. That’s why we wanted to pass on a company which has already built that early infrastructure, collected those foundational tools, and even accumulated a decent supply of reserve funding so that the next leadership team is ideally set up for success.

Feel like you’ve got the drive, the ambition, the heart, and the artistic daring to run this company but are maybe a bit worried about the logistics? We are pleased to say that outgoing Artistic Director Jamie Dunsdon will remain available as a mentor to support the new artistic leadership through the transition and in the years to come on an as-needed basis. She will be available to talk you through the basics of company management, reporting, budgeting, and more. The new artistic leadership is also highly encouraged to seek out other mentors and supports to help take them in the direction of their choice.

Please view the full posting at https://www.verbtheatre.com/jobs and see a full list of instructions for what we need from you!