What’s On (Edmonton): The World Premiere of Alina by Lianna Makuch – Pyretic Productions

What’s On (Edmonton): The World Premiere of Alina by Lianna Makuch – Pyretic Productions 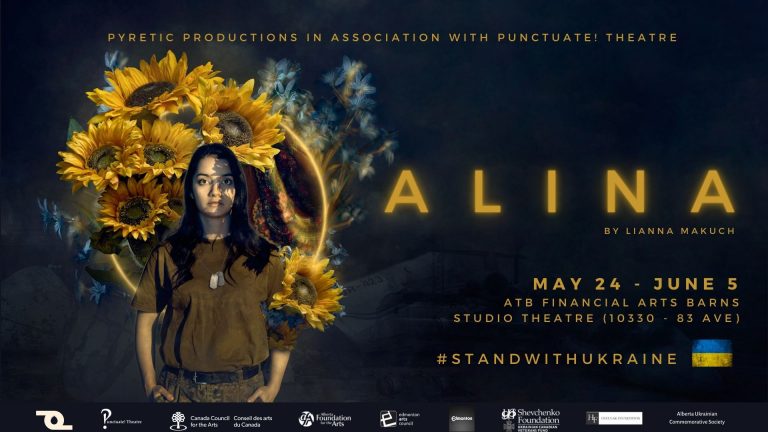 Alina is inspired by the true experiences of a 19-year-old volunteer Ukrainian combat medic who leaves everything behind to go to the front line of one of the deadliest battles of the war in Eastern Ukraine in 2015 — the battle for the Donetsk Airport. But when she returns home to the shock of “peaceful” civilian life she realizes her struggle does not end at the front.

Alina is an exhilarating, breathless journey toward and away from war.

In February 2020, Pyretic participated in an inspiring artistic residency at IZOLYATSIA Institute in Kyiv, Ukraine. We conducted in-depth interviews with a young woman named Alina Viatkina about her remarkable experience as a volunteer frontline combat medic in 2015. Being a 19-year-old young woman, Alina was unable to join either the official military or volunteer battalions. In spite of this, she posed as a journalist and independently made her way to the war zone. Lianna was deeply impacted by Alina’s experiences, and was inspired to write this important story. Pyretic has also been supporting the real Alina’s fundraising efforts to purchase supplies for front line volunteer defenders in Ukraine. www.supportalinaukraine.com

Playwright Lianna Makuch comments that “this story is a window into the human impact of war. The play is based in Eastern Ukraine in 2015, but it is more relevant than ever. It allows the audiences to gain a deeper understanding of our world’s current circumstances with Russia’s brutal invasion of Ukraine in 2022.”

The World Premiere of Alina runs May 24 – June 5 in the Studio Theatre at the ATB Financial Arts Barns. (10330 – 84 Ave). Info and Tickets: www.pyreticproductions.ca