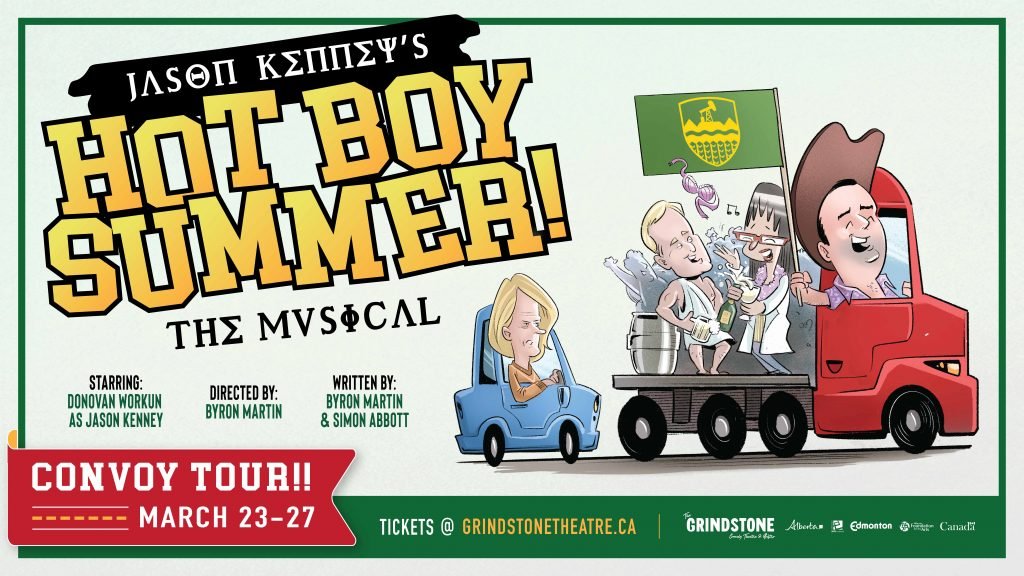 SEEKING: Rachel Notley and Ensemble/Understudy Roles for all tracks. This is a general call for the Rachel Notley role and both male and female tracks for potential added roles and understudy needs for the production.

ABOUT THE MUSICAL
It’s 1983 at Alberta University. Newly-elected student union president Jason Kenney and his frat, Upsilon Cappa Pi, are planning the hottest year-end party ever (rodeo-themed of course). But Kenney’s nemesis Rachel will do anything to stop him. Soon Dean Trudeau, his new friend Deena, and even his frat mates are turning against him. Can Kenney save his hot summer party, and his frat at the same time?

ABOUT GRINDSTONE THEATRE
Grindstone is an improv-based theatre company. Grindstone wrote and produced the disturbingly popular Thundercats: The Musical for the 2019 Fringe. Other mainstage productions include the award-winning improvised musical The 11 O’clock Number, Urinetown The Musical, The Adventures of Chucky and Reggie, Here Lies Henry, The Complete Works of Shakespeare Abridged, HONK! The Ugly Duckling Musical, and Shakespeare’s Henry V.

Additional information:
To submit your interest, email your resume, headshot and video submission to Byron at bmartin@grindstonetheatre.ca. Please write “Kenney Audition” in the subject line. In an effort to reduce paper consumption, we accept online submissions only..

At this time, we are only accepting video submissions. Please submit a video of you performing a comedic monologue and a musical theatre or comedic song.