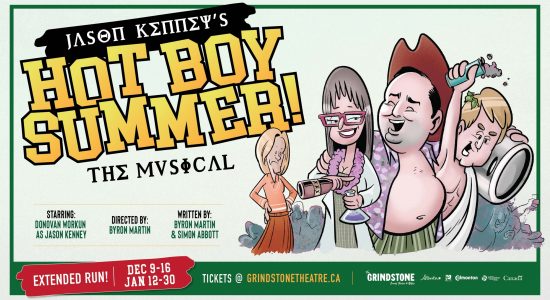 SEEKING: Ensemble/Understudy Roles for all tracks. This is a general call for both male and female tracks for potential added roles and understudy needs for the production.

Actors will be paid Equity rates following the DOT agreement.

Grindstone is an improv-based theatre company. Grindstone wrote and produced the disturbingly popular Thundercats: The Musical for the 2019 Fringe. Other mainstage productions include the award-winning improvised musical The 11 O’clock Number, Urinetown The Musical, The Adventures of Chucky and Reggie, Here Lies Henry, The Complete Works of Shakespeare Abridged, HONK! The Ugly Duckling Musical, and Shakespeare’s Henry V.

To submit your interest, email your resume and headshot to Byron at [email protected]. Please write “Kenney Audition” in the subject line. In an effort to reduce paper consumption, we accept online submissions only.

Auditions will consist of a comedic monologue, a musical theatre or comedic song, and may have a movement/dance component.

If you are unable to join us in person, video submissions will be accepted. Please submit a video of you performing a comedic monologue and a musical theatre or comedic song.