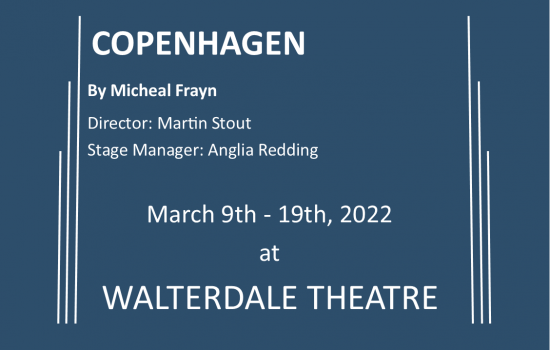 In accordance with Alberta Covid-19 protocols, all callbacks and rehearsals will be performed in face masks.

Three spirits gather on the stage in an attempt to answer an apparently simple question: Why did Heisenberg travel to Copenhagen to revisit his former mentor Bohr at the height of the Second World War?

According to Heisenberg “No one understands my trip to Copenhagen. Time and time again I’ve explained it. To Bohr himself, and to Margrethe. To interrogators and intelligence officers, to journalists and historians. The more I’ve explained, the deeper the uncertainty has become. Well, I shall be happy to make one more attempt.”

During the play, Heisenberg and the Bohrs re-enact their crucial and enigmatic 1941 meeting three times, from each of their different perspectives, in an attempt to understand the motives and intentions of one another. They discuss not only the peaceful uses of nuclear power but also the uncertain possibility and fearsome implications of creating a nuclear weapon. Like sub-atomic particles, each of them is governed by forces beyond their ability to resist, but any attempts to change their own course must have unforeseen and uncertain consequences.

The play takes place within the minds of the participants, long after the events described, so that the ultimate outcomes of each choice are now fully understood. But each character’s understanding and recollection remains subjective and tainted by their own guilt. Their spirits gather together once more to speculate on that evening in Copenhagen in 1941 and to argue how the world might have been changed for better or worse.

Werner Heisenberg was born in 1901 in Germany. From 1922 he studied quantum mechanics with Niels Bohr in Copenhagen, and subsequently became Bohr’s assistant. He is best known for his “Uncertainty Principle”. In 1927, he and Bohr presented their “Copenhagen Interpretation” of quantum mechanics. During the Second World War, Heisenberg worked for Nazi Germany, researching atomic technology and leading their nuclear reactor program. He gained notoriety after the war from his involvement with the Nazis, because he might have given Germany the means to produce nuclear weapons.

Niels Bohr was born in 1885 in Denmark. Before the war, his research was fundamental to nuclear research, some of which led to the building of the atomic bomb. During the war, however, Bohr lived in occupied Denmark and was somewhat restricted in his research; he escaped to Sweden in 1943, just before an SS sweep which would have targeted him through his Jewish heritage. In the USA, he worked in Los Alamos on the atomic bomb until the end of the war.

Margrethe Bohr, known later in her life as Dronning or “Queen” Margrethe, was born in 1890 in Denmark. She was closely involved as an editor and translator of her husband’s work; he would commonly discuss his newest ideas with her, trying to explain them in “plain language”.

We want to encourage performers of any ethnicity, a range of actual ages, all body types, various gender expressions and sexual orientations, a range of mobility levels, and any level of acting experience to audition for Copenhagen.

Please go to the following link to choose an audition time: signupgenius.com/go/60b044fadaf22a4f94-copenhagen

After you have signed up, you may email a headshot and/or a theatre resume to our Production Manager, Louise Mallory at louise.mallory@gmail.com

Headshots and resumes are not mandatory.

Auditions will be initially conducted through a Zoom meeting. You may choose and perform one of three supplied sides from the play, as one of the three characters. You may also be asked to perform the same side a second time with a different interpretation.

Callbacks will take place at the theatre, where participants will be asked to perform scenes from the play in groups of three.

Please bring your schedule to the audition and let us know of any dates or times you are unavailable during the rehearsal period of Jan 7 – Mar 19, 2022.

Rehearsal will be three times a week from January to tech week, days/times dependent on cast/team schedules. You must be fully available during tech week (Feb 28 – Mar 6 2022) and performance run (March 9-19 2022).

Walterdale Theatre is committed to inclusive casting. Artists who are members of under-represented communities are greatly encouraged to audition.

Walterdale Theatre is currently taking part in the REP program and all volunteers who are cast must provide proof of vaccination or a negative COVID test.