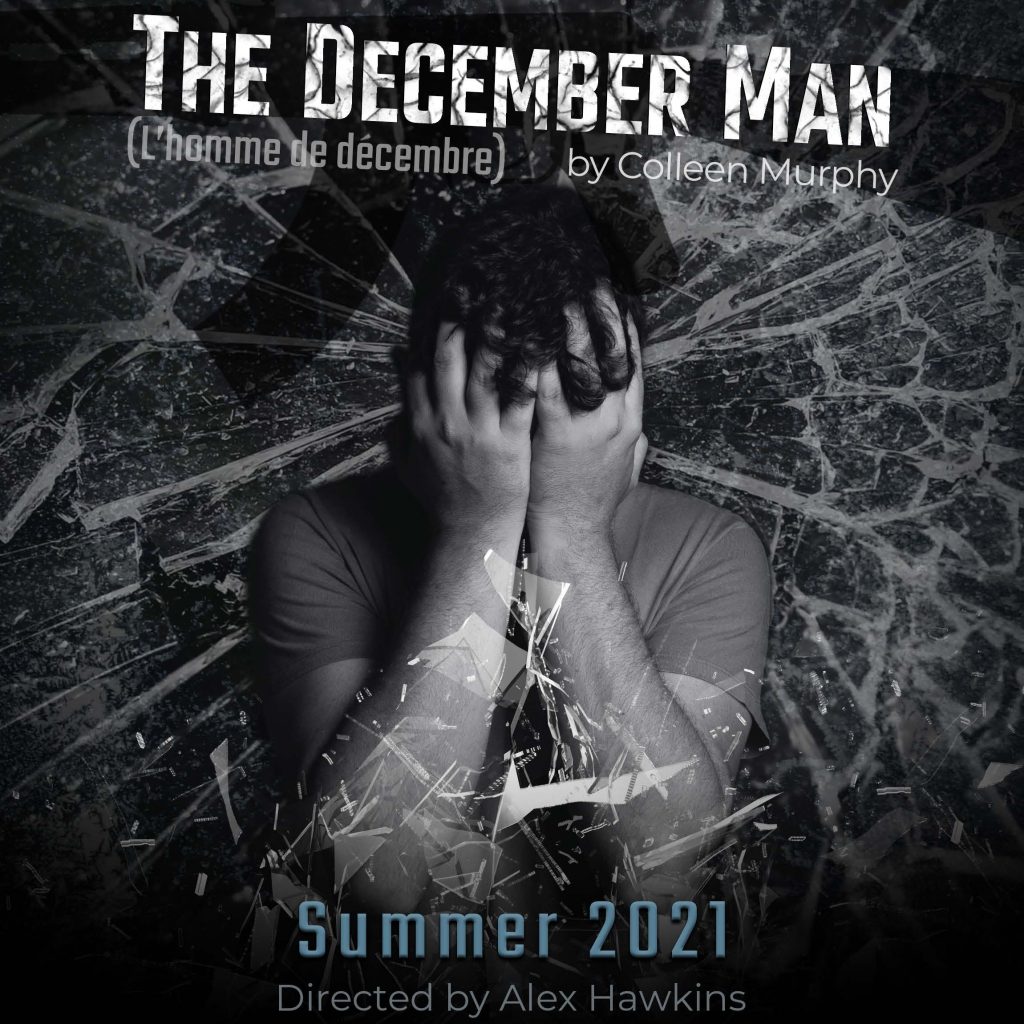 The December Man
By Colleen Murphy

Casting For:
Jean Fournier – A male 22-year-old engineering student who has been attending the École Polytechnique in Montréal.

Play Synopsis:
Colleen Murphy’s play The December Man is based on a historical event. In December 1989, at the École Polytechnique in Montréal, 14 female engineering students were fatally shot by an armed intruder who objected to women trying to enter what he regarded as a male profession. The intruder prevented the male engineering students from intervening to stop these murders. In the play, the character Jean Fournier is one of the male students, and he is burdened by survivor guilt. Jean and his parents, Benoit and Kathleen, work hard to face this tragedy, and to help each other to recover from its effects on them as a family.

Casting – Background
The roles for this production were cast in December of 2020. However, due to changing health restrictions and individual schedules, the actor playing Jean Fournier must be re-cast.

We will NOT have any rehearsals on any Fridays or Saturdays, with the exception of Friday October 29.

Audition slots are scheduled for Tuesday August 3, and for Wednesday August 4, between 6:00 and 10:00 pm at Walterdale Theatre, upstairs in the Rehearsal Hall.

Please note: When you sign up, please sign up for only ONE slot, and only ONE auditioner for each slot.

Please send a photograph and a resume via email to [email protected]
Please include “December Man Auditions” in the subject line.
Please send any questions you may have as well.

Audition Location: Walterdale Theatre, upstairs Rehearsal Hall (enter via the small door on the right-hand side as you face the front of the building)
Street address for Walterdale Theatre: 10322 – 83 Avenue NW, in Old Strathcona

Auditions will involve reading excerpts from The December Man. Each excerpt will include the character of Jean, as well as one or both of the characters of Jean’s mother Kathleen, and Jean’s father Benoit.

We have set up each audition slot to audition ONE actor at a time. Each slot will be 30 minutes long. This will provide enough time to have you read more than one excerpt with the other actors.

To help you prepare for the audition, I will send you a full copy of The December Man via Email when you have signed up for an audition slot. When you receive a copy of the play, I strongly urge you to read it thoroughly and carefully. It would be best if you would read it at least twice, and give yourself time between reads to take in, and think about, what you have read.

It would be very helpful when trying out for the role of Jean to have some knowledge of, and some familiarity with, Quebec-spoken French.

Please note: Those present in the Walterdale Theatre Rehearsal Hall at each of the auditions will be: Alex Hawkins, Director; John Anderson, Assistant Director and Stage Manager; Geri Dittrich, Costume Designer; the two actors playing Kathleen and Benoit; and the one auditioner in each audition slot — for a total of 6 people.
We also wish to assure all auditioners that everyone present at the auditions will wear masks, and will socially distance, according to Walterdale Theatre COVID-19 protocols.

When you have signed up for an audition, you will be sent a detailed Rehearsal Schedule for the production of The December Man. You will be asked to go over the Rehearsal Schedule thoroughly and carefully, and identify any date or time conflicts that you may have with the Schedule, and send a list of these conflicts to the director prior to your audition.

Walterdale Theatre is currently finalizing our sanitation and production procedures to ensure the safety of all cast and crew members, as well as patrons. Strict adherence to government guidelines and best practices will be expected from all members of the production, including social distancing and wearing a mask as required. More details will be provided prior to live-in-person rehearsals.

Walterdale Theatre supports diversity in its casting of actors and other theatre personnel, and is committed to inclusive casting. Actors who are members of under-represented communities are greatly encouraged to audition.