Home » Blog » Who Are We Now? Essays From a New World – Kathryn Smith

Who Are We Now? Essays From a New World – Kathryn Smith

Who Are We Now? Essays From a New World – Kathryn Smith

I’m a designer during a pandemic.

I’ve been trying to write an essay about the experience of designers, technicians, and production staff during COVID, but admittedly (and unsurprisingly) it’s not easy.

There is no succinct phrase or line of dialogue to capture why this experience is so bizarre for this specific group of artists. While I can’t speak for all theatre designers or technicians, I can speak from what I have felt and witnessed over the last year.

It’s a feeling of being incredibly valued while also being completely invisible and unrequired. Many of us as designers have physical, tangible things to show for our work. I could talk about my set design, but the best way to ingest it would be to see it in person.

There’s a saying I’ve heard often within the theatre community: Without lights you couldn’t see the actors, without costumes everyone on stage would be naked, without a set we would have nothing to play on, etc, etc. While this is true (and simplified) I have usually heard it used as an argument for why we need designers, technicians, and production staff. Perhaps in retaliation to the seemingly harmless joke: “You know, we could do the show without you. We just need the performers.”

In retrospect, I have seen a lot of people go out of their way to justify their work to others in the field. Constantly needing to prove why they’re vital. Now with no stages to fill, and many of us making a hard right turn into digital creation and film, we’re constantly trying to find more ways to show up and prove our worth. Production staffs are smaller, often reduced to one or two people for a Zoom reading or streaming showcase. Many of my designer colleagues are working in film, which I applaud them for because that is not easy work and they are killing it. The truth is, some people have the perception that designers and technicians are currently not as needed. We are, for the moment, out of sight and out of mind.

"Inevitably, the question of how to include designers would come up followed by a realistic but complicated statement: ‘obviously there isn’t anything for them to do’."

I didn’t think about it too much at first. Many people were trying to move their productions to a digital platform, finding ways to entertain and support their audiences. Inevitably, the question of how to include designers would come up followed by a realistic but complicated statement: ‘obviously there isn’t anything for them to do’. And I agreed. How would we make space for ourselves when having a physical space was the thing we needed?

I am so incredibly thankful for the folks who saw the community of artists in need of something to do, and thought of how to gift our skills and knowledge to others. This COVID life has taught me how much I love educating. Most of my design work the last year has been leading design workshops for youth, teaching people about model building (whether it be plasticine and cotton balls or gingerbread houses), but most of all talking about design from the very beginning seed of an idea. Sort of like the discussion of design in theory. Since breaking down the steps of design and teaching it, I understand my own process better. It’s given me space to breath and really think about my work.

It’s also given me space to think about the old work. About what we used to do. In my classes, I encourage people to set healthy boundaries for themselves. To advocate for their work and to own the title of artist. To not be afraid to set time aside for yourself and for your relationships. At some point I realized I hadn’t been practicing this in my own life and it had taken a pandemic for me to slow down and actually examine my working practices.

While looking at my own work/life balance, I began looking more closely at our industry and at the structure in which we work. I’ve heard so many people say “that’s the job. That’s just how theatre works.”

Sure. But we also have the agency to change how theatre works.

At the beginning of the first lock down in Calgary, some people tried to fit the old routine into this new container. Very quickly we realized 8 hour rehearsals on Zoom were not sustainable. Our attention spans were getting shorter, and there was a general sense of apathy that distracted us from the work. So rehearsals became four hours long. We developed more flexibility around ‘life’ happening in video meetings (ex. Parents and guardians juggling child care, pets needing attention, construction outside of our homes, poor internet connection). But these life happenings have always been very much so in the room with people. They just weren’t physically present. Out of site, out of mind.

So all of this debate around process, structure, and theory for my work as a designer has gotten me thinking more about what we can change or leave behind when we eventually do return. I’m not sure what the actionable tasks are, but I have thoughts about what I would leave behind vs. what I would keep.

Since I love lists, I thought I could present the things I would leave behind from pre-pandemic theatre life in list form. Because it provides enough levity to the topic while also being truthful and easy to digest.

THINGS I WOULD LEAVE BEHIND FROM PRE-PANDEMIC LIFE:

Of course, two things can be true at one time, and I do miss very much many, many things from the work I used to do. So, to even it out, here is a second list.

THINGS I WOULD KEEP FROM PRE-PANDEMIC LIFE:

In the grand scheme of things, I’ve appreciated moments over the past year where I’ve been able to reflect on how things can change for us in the future. I am by no means perfect in setting up boundaries on shows. But I think there is a larger discussion to be had regarding how companies and other artists can offer up support and healthy structures for designers, technicians, and other production team members once we go back into the theatre. Perhaps we won’t feel the urgency to prove our worth as much. 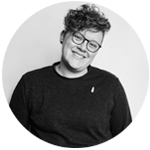 Kathryn Smith (they/them/theirs) is a designer, director, singer songwriter, and theatre practitioner living and creating in Mohkinstis. They have turned their focus to non-hierarchical structures and creation within communities for the last several years.