Home » Blog » Who Are We Now? Essays From a New World – Luay Eljamal

Who Are We Now? Essays From a New World – Luay Eljamal

Who Are We Now? Essays From a New World – Luay Eljamal

LOOKING TO THE PAST TO SEE THE FUTURE: A LEBANESE-CANADIAN MANIFESTO – Luay Eljamal

The following essay pulls from research I conducted in 2016 for a paper entitled “The Manipulation of Collective Memory Through Art in Post-Civil War Lebanon”, which can be read in its entirety here.

When I first left home for university ten years ago, I remember having to learn a number of new skills in a passionate attempt to gain my own independence. Things I had taken for granted—like knowing how to cook my own meals—suddenly had to be mastered as efficiently as possible. In those desperate moments, I found myself turning to my Middle Eastern heritage for guidance. I learned to cook, for example, by replicating Lebanese recipes, which both built-up my “adulting” arsenal and satiated my need for independence through delicious garlic-infused comforts (chicken shawarma, anyone?) Today, I find myself employing similar tactics to solve new challenges that I come across every day as the Programs Manager for Arts Council Wood Buffalo and Artistic Director of Symmetree Theatre in Fort McMurray, Alberta.

Where casual audiences may once have had the mental and emotional capacities to consume theatre as a form of challenging their minds and exposing themselves to new perspectives, they now mostly turn to theatre as a source of escapism, if they turn to us at all.

There’s no denying that the pandemic has changed the way in which theatre and the arts are being consumed. It has also changed the kinds of things that people are turning to the arts for. Where casual audiences may once have had the mental and emotional capacities to consume theatre as a form of challenging their minds and exposing themselves to new perspectives, they now mostly turn to theatre as a source of escapism, if they turn to us at all. While it’s important to give audiences what they need today, being a leader in the arts community means it is also my duty to look to the future and prepare for what artists and audiences will need tomorrow.

I’ve always believed that the arts play a critical role in helping society articulate and commemorate the cultural shifts that propel humanity forward. Naturally, I now find myself asking: how are the arts going to lead audiences through the emotional, physical and mental healing that will be needed once COVID-19 becomes a thing of the past?

In an attempt to answer this, I turn to my Lebanese heritage for clarity, once more.

It has been over twenty years since the Lebanese civil war came to an end, and there is so much that Lebanese artists have done since then to catalyze discussions and support people in processing the war’s traumatic effects. I believe that learning from and adapting what some of these artists have done just might be the crystal-ball equivalent to understanding how we can make relevant art in a post-COVID world.

In my search for answers, I turned to three Lebanese artists, as case-study examples, to explore how this can be achieved. They are:

All three of these artists have produced vastly different works which attempted to provoke movements towards unity, peace and self-healing in post-civil-war Lebanon.

Nada Sehnaoui — Installation Art: Haven’t 15 Years of Hiding in the Toilets Been Enough? 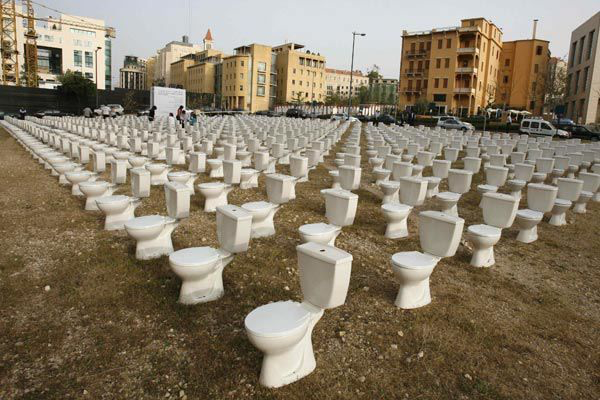 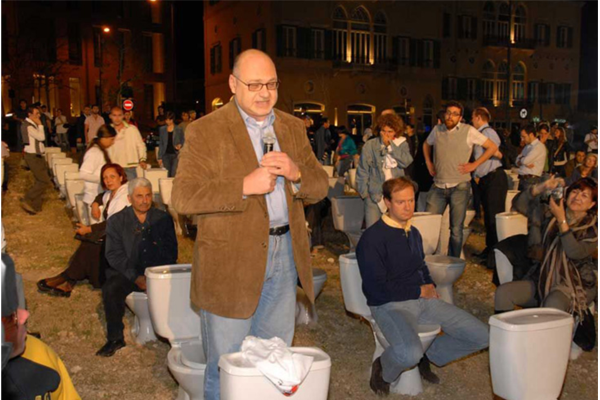 In 2008, Sehnaoui produced an art installation project called Haven’t 15 Years of Hiding in the Toilets Been Enough?, which involved installing a series of 600 toilet seats arranged in a grid in downtown Beirut. Over the course of her installation, passersby were encouraged to sit on the seats and reflect with one another, through a microphone, about the hardships that they had experienced during the war. The toilet seats stood as a symbol for a time when Lebanese families would retreat to their bathrooms—commonly the innermost room of a house with no windows— in order to stay safe from bombs and other attacks of war. By drawing on the Lebanese people’s raw post-traumatic memories of the war, Sehnaoui questioned whether war experiences, such as locking oneself in a bathroom, were worth revisiting in 2008, when Lebanon was under threat of more sectarian violence.

Mroué’s play, Riding on a Cloud, features Mroué’s youngest brother, Yasser, recounting the real story of his aphasia, which he developed as a result of being shot by a sniper toward the end of the Lebanese civil war. Yasser is left being unable to understand or produce speech, complicating his ability to recount the past. Through the story of his brother, Mroué highlights the harms of deliberately ignoring the past in favour of rebuilding a new life, and also echoes the practices of many Lebanese people who have chosen to move on from the trauma of the war through a deliberate willingness to forget the past. Mroué argues that numbing oneself to the pain of the past puts the Lebanese people in danger of repeating their needlessly violent history again in the future. 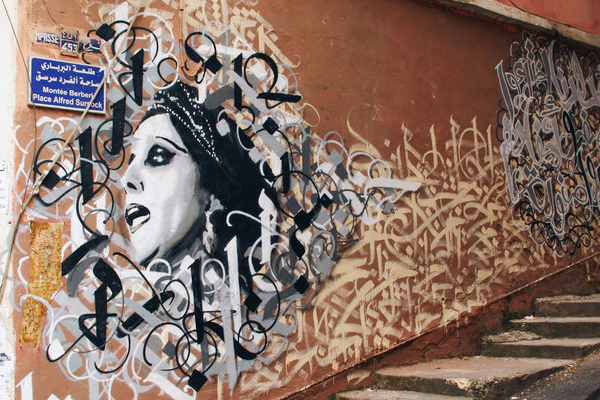 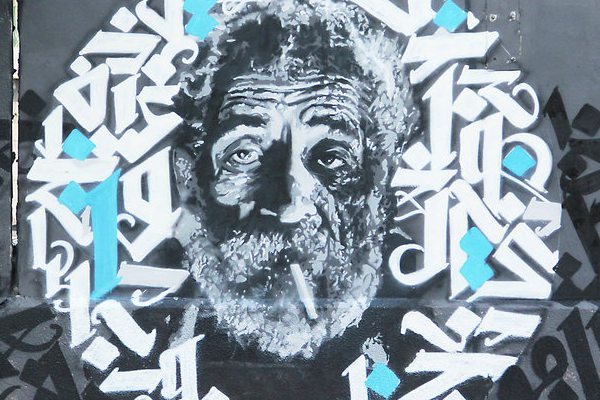 Halwani’s art manifests itself in the form of public murals, which are often painted in the place of political propaganda that he has stripped off from various city walls—some of which had been left over from civil war times (Elkamel and Halwani 2015). ‘“What I try to do […] is write the stories of the city on its own walls – creating a memory for the city”’ Halwani explains to a journalist in an article for The Guardian (Bramley and Halwani 2015). The memory that he creates for the city is rooted in stories of unity, as he chooses to paint portraits of well-known public figures who represent all of Lebanon’s history and culture regardless of the faction that a Lebanese person may belong to. His murals seek to exemplify the ways in which all Lebanese people are alike on the facades of destruction that would otherwise stand as reminders of Lebanon’s war-torn past.

They all did this with the goal of preventing history from repeating itself and encouraging audiences to reflect on their traumas in a healing and clarity-defining way.

All three of these artists have chosen to manipulate the collective memories of Lebanese citizens, in an attempt to promote unity and healing. Sehnaoui resurrects and reminds her audiences of the traumatic memories they all experienced in the past. Mroué highlights the dangers of choosing to forget memories in order to promote healing. And Halwani promotes unity and healing by converting difficult memories into bittersweet, beautiful ones. They all did this with the goal of preventing history from repeating itself and encouraging audiences to reflect on their traumas in a healing and clarity-defining way. It’s worth noting that their approaches likely varied due to their different lived experiences, as well. Sehnaoui, for example, spent some of the Lebanese civil war-time in Boston and Paris pursuing diplomas in higher studies, while other Lebanese people suffered the war at home. One may argue that this distance allowed her to objectively examine what happened to the Lebanese people without being directly affected by the trauma of war. Contrastingly, Mroué was directly impacted by the war through his brothers aphasia, and Halwani, was born three years after the end of the Lebanese civil war; perhaps what allowed him to neutrally assess how to promote progression towards peace, without being held back by direct traumas of the war. Each artist was extremely effective in their own way.

Okay, but how closely can this resemble the progression of the arts in a post-COVID world? I would argue: very closely! The pandemic (and the various civil rights movements that continue to arise within it) has created numerous sectarian divides across the world, similar to the sectarian divides that exist within Lebanon. We have maskers and anti-maskers, left-wing and right-wing, BIPOC and Caucasians; with new movements gaining traction every day. Similarly, the lived experiences that artists have through the pandemic have varied greatly. Imagine the multitudes of ways in which the pandemic could be documented by an artist who did not contract COVID-19. Now imagine an artist who did contract it. What about an artist who had to be put on a ventilator? An artist who lost a loved one? Now add racial identities into the mix. One artist might have the capacity to critique the pandemic without having to first process the harsh traumas that it put on them, while another might have to heal themselves first or else viscerally express their traumas wholly and fully through their art.

As leaders in the arts, we need to prepare ourselves to support the full magnitude of stories, and initiatives that start to pour out of our artists’ hearts and minds, when the time is right.

How do we do that?

This would be my manifesto:

Encouraging audiences to assess their current social standings in response to subjective pieces of art—in the way that these Lebanese artists have done—can be a very useful tool, but it’s important to remember that no one artist would be likely to pen an accurate and widely-acceptable representation of the pandemic and its movements on their own. I hope that my fellow arts leaders see the value in priming artists of many disciplines, backgrounds and identities today, so that when the time comes, we are at the forefront —uniting and healing our audiences, and ultimately promoting arts recovery, as well.

Luay Eljamal (he/him) is a theatre artist and Arts & Culture Manager living in Fort McMurray, AB. He has worked as a writer, director and audiovisual designer on projects across Canada and the United Kingdom. He currently works as Programs Manager for Arts Council Wood Buffalo and is the Artistic Director of Symmetree Theatre, which aims to share stories about marginalized members of society, where the main conflict does not stem from the fact that they’re marginalized.

Bramley, Ellie V. and Halwani, Yazan (2015). ‘How a Beirut Graffiti Artist is Using his Murals to Try to Unite a Fragmented City’. The Guardian. (Accessed 20 December 2015)