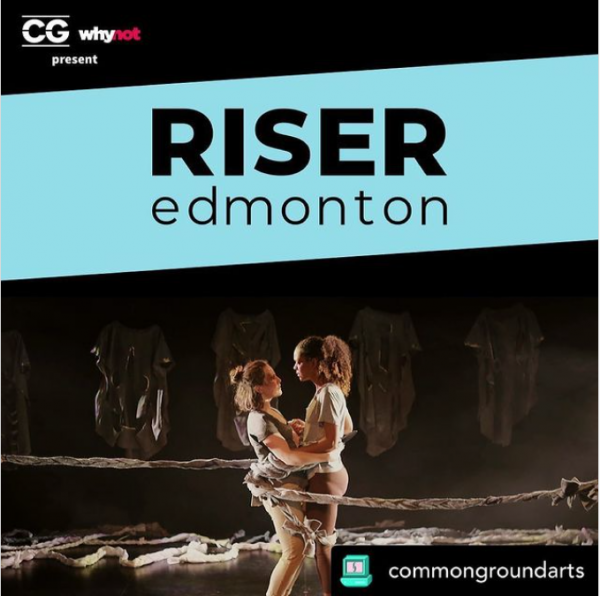 Common Ground Arts Society (CGAS) is thrilled to announce a partnership with Toronto’s Why Not Theatre to launch RISER Edmonton as part of the 2022 Edmonton Theatre season.

With generous support from the Government of Canada and the RBC Foundation, Why Not Theatre is embarking on a national expansion of RISER, starting in Edmonton in February 2022.

RISER Edmonton will support the development and production of four new Edmonton-based projects each year, with participants receiving enough in-kind resources to help reduce their costs of production by one third, on average. In addition, artists undergo a year-long mentorship and training program with a focus on developing producing skills.

Originally developed by Why Not Theatre in 2014, RISER was created to address challenges in producing independent theatre. RISER connects senior leadership from the theatre community with underserved artists to maximize existing infrastructures, share resources and risk, help build new audiences, and support a commitment to create and innovate.

RISER brings together artists and Senior Partners who are generous, flexible, curious, and willing to share and work in new ways. The heart of RISER is building relationships to create an interdependent theatre ecosystem, where the success of one is the success of many. With RISER, we move from independent to interdependent.

“RISER Edmonton is an inspiringly collaborative approach to theatre creation that will ensure emerging artists are well supported in the development of new work, while providing meaningful connection to senior leadership in our community,” says CGAS Artistic Producer Beth Dart. “It’s a win-win for everyone: we share the risk, we resource the next generation of theatre artists, we invest in the future of Canadian theatre, and we close the mentorship gap that exists in those in-between years when artists need the most support to transition from emerging to established.”

“RISER is by design entirely collaborative,” says Why Not Theatre Founder & Co-Artistic Director Ravi Jain. “We were able to develop and refine RISER in Toronto with the help of a community of Senior Partners and a talented roster of artists. Since the model has been such a successful platform in supporting underserved artists in Toronto, we wanted to bring it to other major city centres across Canada to support more artists all across the country. We’re excited and humbled to start this journey in Edmonton, a city brimming with more theatre artists per capita than any city in Canada. We couldn’t be more grateful to both the RBC Foundation and the Government of Canada in helping us to share this vision and impact change on a national level.”

“Now that I’m producing on my own, I feel upheld. I feel way more confident with the simple tasks. I gained a lot of those skills with my time in RISER,” says RISER 18 artist daniel jelani ellis. “RISER gave me a platform to take more risks as a director, in terms of working in a form that is unconventional and working with artists from different disciplines,” says RISER 17 artist Mumbi Tindyebwa Otu. “Producing on your own is a lot harder,” says RISER 17 artist Justin Miller.

Common Ground Arts Society is a tiny but mighty arts org getting it done on passion and grit. We radically invite artists of all disciplines at all stages of their career to wildly experiment with process and craft. We believe in people and process over product: come as you are; create from where you’re at; learn, fail, try again, fail better; tend to your whole self; share art, share kindness, share in community. Mentorship and learning are at the core of everything we do: we’re still learning, we’ll never stop learning, and we want to share in this learning with you.

As the producers of Found Festival, Edmonton’s only found space arts festival, CGAS brings art out of galleries, theatres, and concert halls and directly into the community. We curate creative collisions between audiences and artists. We instigate curious happenings. We foster dialogue about space, place, sense of belonging, and all the meaningful moments between.

About Why Not Theatre:

Good isn’t good enough. At Why Not Theatre, we’re out for better.

We shake up the status quo to make the world we want to see. A world where everyone can achieve their full potential. We question everything. Rethink how stories are told. And who gets to tell them. We believe in art. It’s how we make change.

We MAKE great work that takes chances, and tours all over the world. We SHARE everything we have, because more artists mean more stories. We PROVOKE change because we believe art should be for everyone.

We push boundaries, build community, and find new ways. We represent Toronto, at home and on the world stage.

Founded in 2007, we are growing rapidly, led by Ravi Jain, Kelly Read, and Miriam Fernandes.

Since 2014, RISER has since engaged 300 artists, in support of 30 new Canadian productions which have gone on to 100 international engagements, reach 25,000+ audiences, and receive 50+ awards and nominations. Two-thirds of all RISER shows (including Quote Unquote Collective’s Mouthpiece, Motion’s Oraltorio: A Theatrical Mixtape, and Pearle Harbour’s Chautauqua) have gone on to have a future life after their RISER debuts.