Home » Blog » Who Are We Now? Essays from a New World – Jacquelyn Cardinal

Who Are We Now? Essays from a New World – Jacquelyn Cardinal

Who Are We Now? Essays from a New World – Jacquelyn Cardinal

FROM THE DESK OF AN APOCALYPSE DOULA – Jacquelyn Cardinal

One of the clearest varieties of memory I have of my childhood were the nights when Hunter, my younger brother, and I were treated to myth-sharing by our Dad. Rather than reading the usual storybook chosen from our shared collection, he would tell us epic stories from our people, the nêhiyawak, brought to life with shadows cast by his hands on our bedroom walls. These stories almost always starred animals, spirits, and grand challenges met with courage, love, and sacrifice.
In a wash of unexpected nostalgia, a favourite of these stories returned to Hunter and me in March of this year as we watched the news of the pandemic unfolding around the world from our shared apartment in downtown Edmonton. On a long walk in the river valley after a particularly difficult news day, we retold in parts the story that we now recognize as one known by many cultures on Turtle Island as a remaking of the world story.
The version our Dad shared with us begins after a great flood had covered the earth in a shallow sea, upon which a vast turtle floated. Atop the turtle, a group of animals huddled together, waiting for the waters to recede. Among these animals were a rabbit, an otter, a beaver, a loon, and a muskrat.
One day, the Creator came down to the animals and told them that if they wanted new land to live on, they must retrieve some of the earth deep below the water and place it on the turtle’s back. Only then, the Creator said, would new land grow.

The hopes were highest for the strongest swimmers like the otter, but as each animal tried and failed, that hope soon turned to despair.

After agreeing amongst themselves that they should try, each of the animals took turns to dive down below the water. The hopes were highest for the strongest swimmers like the otter, but as each animal tried and failed, that hope soon turned to despair. Eventually, only the muskrat remained untested, but the other animals told the muskrat not to bother with an attempt himself and that the strong swimmers would keep trying.
During the night, while the other animals slept off the fatigue of a day spent trying to reach the bottom of the sea, the muskrat lay awake on his back, looking at the stars. In his heart, he began to realize what needed to be done. With a splash that woke the other animals from their sleep, the muskrat dived down beneath the water. The other animals called for the muskrat and watched the swirling sea, waiting for him to surface. But as short moments stretched into long ones, they fell into silence.
It wasn’t until the sun was halfway across the sky that they saw something bobbing on the water in the distance. When the turtle had gotten close enough to recognize the shape of the muskrat, still and soundless, the other animals jumped into the water to pull the little body onto the turtle’s shell. As they began to mourn the muskrat, arranging the body in the centre of the shell in alignment with the path of the sun, they noticed that one of the muskrat’s paws was shut tight. Gently, the otter opened it and found a small bit of dark mud inside.
The animals began to celebrate, their joy mixed with many tears, as they turned the muskrat’s paw to drop the mud on to the turtle’s shell. The land that grew from that small bit of mud, clasped in the paw of the humble muskrat, lies beneath our feet today.
“I always wondered how the animals got there in the first place,” I remember saying to Hunter, crunching through the snow and ice that still stuck to the ground. “Did Dad ever tell you that part?”
“No, I don’t think so,” Hunter responded.
I couldn’t recall either.
Many Indigenous scholars have said for years that we, as Indigenous peoples, are leading lives in our post-apocalypse. When I had first heard this idea, it immediately resonated, explaining (at least in part) why the myth of the remaking of the world struck a chord so deep within me, even as a kid. The fact that the ways of life that would be recognizable to our ancestors are gone, likely never to return, creates a strange form of grief that is difficult to explain to someone who doesn’t already know it in their blood and bones.

…it’s always there—providing teachings about loss and loneliness that no one wants, but everyone needs.

I find this grief to be an omnipresent character in my storytelling. It’s rarely the main character, but it’s always there—providing teachings about loss and loneliness that no one wants, but everyone needs. My sense of duty to sit with this teacher, listen intently, and try to bring those teachings forward in my stories led me to jokingly coin a term that I honestly feel suits me better than playwright: Apocalypse Doula, one who sits in between the old world and the new.
As March turned to April, then slowly to May, something about the liminality of the pandemic (a port of call for Apocalypse Doulas such as myself) brought clearly to mind the story of the animals on the back of the turtle. “How did they do it?” I would wonder aloud to Hunter and anyone else who knew the story well, “How did the animals move from losing everything of the old world, that grief, and decide to try and create something new? Why is that part of the story untold?”
No one had answers. 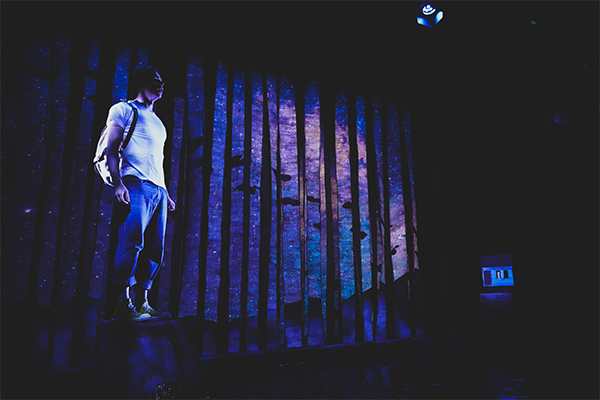 Hunter Cardinal in Lake of Strangers. Photo by Ryan Parker.
So just as we had done when we created our play Lake of the Strangers, Hunter and I began to engage in a process that we call “myth architecture.” An extension of the teachings we’ve gained from our Elders, who have told us that storytellers tell stories for those who need them, myth architecture begins with a question that feels important but is without an answer and challenges us to craft a narrative that provides some sort of response. Often, this looks like “completing,” “expanding,” or “setting up” a pre-existing myth. With Lake of the Strangers, for example, we completed the myth of mista muskwa (The Big Bear) as we tried to answer the question: Why should we heal when there is so much darkness?
As we continued to imagine the image of the animals floating on the back of the vast turtle of legend, a concept emerged for the story that we began to work on in earnest this past summer: câpân. When complete, câpân will be the tale of how the animals got to the back of the turtle. Through the lens of a group of teenagers finding their way at the end of the last great ice age on Turtle Island, we will seek to answer the question, “What do we need to begin rebuilding the world once the old one has been swallowed up?”
Like most of us, I know I’m counting down the days until the end of 2020, despite understanding that once we emerge into a new year, we will still be in the process of being forever changed by a world that has ended and has not yet been reborn.

Each and every one of our ancestors endured times such as these, and we will too.

Let’s not mince words: this is indeed a deeply sad and frightening time. We are separated from one another, have lost things that may never return in the same way, and we don’t know what the future holds. But, as Marcus Aurelius said during the time of plague during his reign in 165 CE, “All of this has happened before and will happen again—the same plot from beginning to end.” Each and every one of our ancestors endured times such as these, and we will too.
Inexperienced as I am, I do believe that any good Apocalypse Doula will say that while we have no choice but to exist in the in-between that is this shared journey through our apocalypse of sorts, we do have the opportunity to reach out for what is old and good so that it may take root and become solid beneath our feet once again.
And it seems that English, though it fails me often, carries this teaching as well, for the origin of the word apocalypse is Greek, meaning “to uncover.”
So may you uncover light, love, and hope until we can see each other once more on the other side.

Jacquelyn is a sakāwithiniwak (Woodland Cree) playwright and producer hailing from Sucker Creek Cree First Nation who, in all aspects of her life, seeks to equip communities with the means to support themselves and each other while walking together on a shared path, a sentiment passed down to her through the generations.