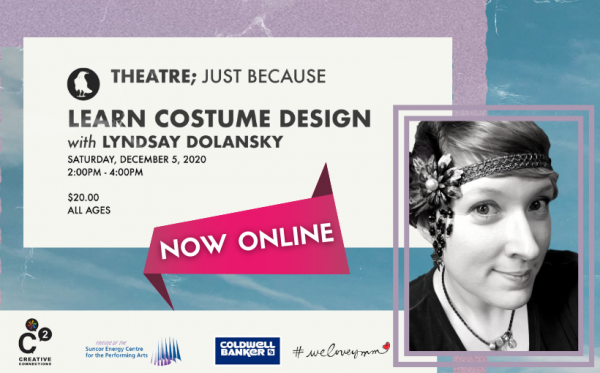 Learn about Costume Design with this in-depth class!

Costumes speak for themselves. They tell the story of a place, the period, and most especially of a character. Whether it be a brave knight, strong-willed flapper, or an unlikely hero, you will be called to clothe them and bring them to life.

Conceptualizing a costume requires time travel, whether it’s in the past or into the future. Designing garments for France’s aristocracy during the French Revolution of 1789, or having to dress political refugees in a dystopian world in 2049, requires extensive research.

This class covers script and character analysis, finding the right source material, how colours relate to the story, audience expectations, concept mediums, and best practices for organization and presentation.

It is advised that students bring a notebook and writing tools.

Lyndsay Dolansky is the Head of Wardrobe and a Theatre Technician at Keyano Theatre since September 2015. Originally from London, ON, she studied Technical Costume Studies, at Fanshawe College, under skilled professionals from Stratford Festival Theatre and The Grand Theatre London. Her training included pattern drafting, tailoring, millinery, dyeing techniques, costume history, and backstage handling. As part of her education, she completed her practicum with The Banff Centre Arts, Banff, AB, where she learned more about the industry from their Masters. During that time, she heard about the opportunity to work in Fort McMurray, where she applied and, shortly after, accepted her current position.