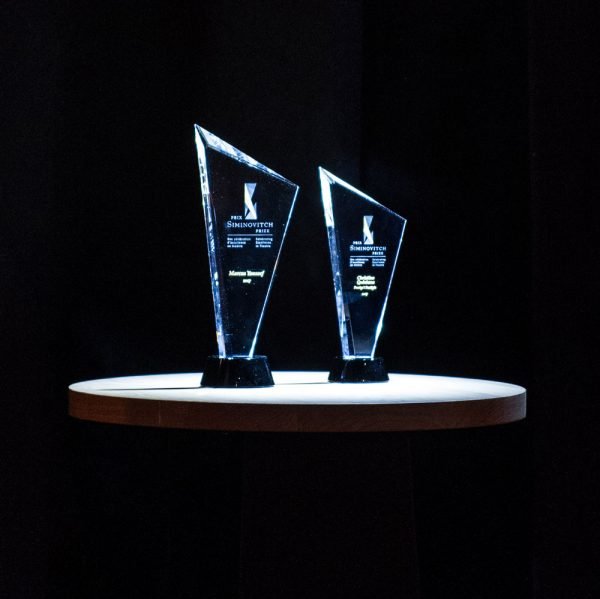 photo by Andrew Alexander
The Siminovitch Prize Foundation has announced the shortlist for this year’s Siminovitch Prize, the most prestigious theatre award in Canada. The jury has selected five outstanding playwrights as finalists for the esteemed theatre prize, now celebrating its 20th year of honouring excellence and innovation in Canadian theatre.
The Siminovitch Prize Foundation is proud to introduce this year’s shortlist: Carmen Aguirre (Vancouver), Tara Beagan (Mohkintsis/Calgary), Martin Bellemare (Montreal), Karen Hines (Calgary/Toronto), and Annick Lefebvre (Montreal).
“Fierce. That’s the word that springs to mind when I think about these five outstanding playwrights,” said Siminovitch Prize Foundation Jury Chair Vanessa Porteous. “They are each driven by an unstoppable force. A battle with injustice, a need to say what no one else has said before. An inescapable artistic vision, a use of language that both burns and heals. A life-long compulsion to experiment, to push against the rules. Regardless of what drives them, these artists stand alone. And yet, each of these five artists is also renowned for opening their arms, so generously, to upcoming voices. They are known for providing encouragement, mentorship, inspiration, even shelter. Deeply rooted in their craft as playwrights, these artists are leaders in their communities, and their influence is felt in multiple dimensions, both deep and wide. When their work meets an audience, it is unforgettable. A thrilling list.”

Carmen Aguirre is an award-winning theatre artist and author who has written and co-written more than 25 plays, including Chile Con Carne, The Refugee Hotel, The Trigger, Blue Box, Broken Tailbone, and Anywhere But Here, as well as the international bestseller and #1 in Canada, Something Fierce: Memoirs of a Revolutionary Daughter (winner of CBC Canada Reads 2012), and its bestselling sequel, Mexican Hooker #1 and My Other Roles Since the Revolution. Carmen is currently writing an adaptation of Euripides’ Medea for Vancouver’s Rumble Theatre, and Moliere’s The Learned Ladies for Toronto’s Factory Theatre. She is a Core Artist at Electric Company Theatre and a co-founding member of the Canadian Latinx Theatre Artist Coalition (CALTAC). She has more than 80 film, TV, and stage acting credits, including her award-winning lead role in the Canadian premiere of Stephen Adley Guirgis’ The Motherfucker with the Hat, and her Leo-nominated lead performance in the independent feature film Bella Ciao!. She is a graduate of Studio 58.

Tara Beagan is proud to be Ntlaka’pamux and, through her late father’s side, of Irish ancestry. She is cofounder/director of ARTICLE 11 with Andy Moro. Beagan served as Artistic Director of Native Earth Performing Arts from February 2011 to December 2013. During her time, NEPA continued with traditional values for guidance, had an Elder in Residence, and named and moved into the Aki Studio. Beagan has been in residence at Cahoots Theatre (Toronto), NEPA (Toronto), the National Arts Centre (Ottawa) and Berton House (Dawson City, Yukon). She is now Playwright In Residence at Prairie Theatre Exchange (Winnipeg). Seven of her 28 plays are published. Two plays have received Dora Award nominations (one win). In 2018, Beagan was a finalist in the Alberta Playwrights’ Network competition. In 2020, Honour Beat won the Gwen Pharis Ringwood Award for Drama. Recent premieres include Deer Woman in Aotearoa (New Zealand), Honour Beat opening the 2018/19 season at Theatre Calgary, The Ministry of Grace at Belfry Theatre in Victoria, and Super in Plays2Perform@Home with Boca Del Lupo (Vancouver).

A graduate of the National Theatre School of Canada’s writing program, Martin Bellemare was awarded the 2009 Gratien Gélinas Prize for Le Chant de Georges Boivin. La Liberté was presented at La Rubrique (Jonquière) in 2013 and in Montreal in 2015, and was scheduled to be staged in Ottawa in 2020. Maître Karim la perdrix (2018 Prix SACD de la dramaturgie francophone, awarded by the Société des Auteurs et Compositeurs Dramatiques) will premiere at the Théâtre des Capucins in Luxembourg in 2021. Moule Robert (CNL Scholarship, shortlisted for the 2017 Prix SACD de la dramaturgie francophone and the 2018 Michel Tremblay Prize) was produced simultaneously at La Rubrique and at the POCHE/ GVE in Geneva, then at the Théâtre de Belleville in Paris. Martin is a four-time recipient of the Aide à la création grant from the Centre national du Théâtre/ARTCENA in Paris, and two of his plays are included in the repertoire of the Comédie-Française. Two of his plays for young audiences, Un château sur le dosand Des pieds et des mains, which was first produced at the NAC, have toured in Canada and internationally. In 2019, Extraordinaire et mystérieux and Charlie et le djingpouite were produced, and Cœur minéral premiered at the Francophonies in Limoges. The latter play was scheduled for a Montreal production in 2020.

Karen Hines’s lush satires have traveled the globe: from Toronto to Kuala Lumpur, her plays and ‘little films’ have won critical acclaim, charmed and horrified her audiences, and cemented her reputation as “one of the most original artists in the city” (Toronto Life), and “one of the gems of Canadian theatre” (Toronto Star). Raised by scientists, Hines’ keen musings on modern life combine such disparate elements as magical realism, pink-brand feminism, real estate and climate change. She is the author of seven award-winning plays, all published by Coach House Books, and she has twice been finalist for the Governor General’s Literary Award, for her Drama: Pilot Episode and for her trilogy of Pochsy Plays. Hines has collaborated on the development of many new productions by other artists, and she is the long-time director of internationally beloved adult horror clowns Mump & Smoot. Recent projects include her micro-theatrical solo Crawlspace, and All the Little Animals I Have Eaten, which was to have had its Toronto premiere just as the pandemic came. Currently, she is creating new plays, including the fourth in the Pochsy series. Her singular style, informed by an alchemy of clown and bouffon, has won her a reputation as an auteur and a conduit of biting, hilarious, provocative entertainment.

The 2020 Siminovitch Prize Foundation jury was comprised of Chair Vanessa Porteous (Calgary), Jessica Carmichael (Montreal), Julie McIsaac (Toronto/British Columbia), Olivier Sylvestre (Montreal) and Donald Woo (Toronto).
The jury noted: “The nominees were so extraordinary and numerous this year, and of such range and variety, that we selected five nominees instead of the usual four. The hugely competitive slate of nominees is evidence of the immeasurable creative power and thrilling range of artists in the contemporary Canadian theatre. Currently, the work of these playwrights on the shortlist, and of so many others, is held in suspension because of the pandemic. Their livelihoods and future are in real jeopardy while Canadian theatre remains dark. It is hoped that these artists, and all Canadian theatre artists, will be heard by audiences again soon.”

This year’s event will be the first-ever virtual ceremony for the Siminovitch Prize, and will take place on Thursday, November 26 at 7 p.m. ET. This inclusive, interactive celebration will gather Canadian theatre makers and dedicated theatre fans together to honour the shortlisted artists and unveil the laureate. Event details to follow. All are welcome.
“This year marks the 20th anniversary of the Siminovitch Prize, and we approach this milestone during a very painful time for the theatre, with a commitment to the future and to supporting excellence and innovation with this annual $100,000 Prize,” said George Thomson, Chair of the Siminovitch Prize Foundation Board of Directors.
https://siminovitchprize.com/
PrevPreviousScholarship (Alberta): Dr. Dasha Goody Foundation Scholarship
NextCall for Submissions (National): Canadian Stage Microgrants and Scholarship ProgramsNext
3rd Floor Percy Page Centre
11759 Groat Road
Edmonton, AB T5M3K6
Canada