Home » Blog » Who Are We Now? Essays from a New World – Nalyn Tindall

Who Are We Now? Essays from a New World – Nalyn Tindall

Who Are We Now? Essays from a New World – Nalyn Tindall

When schools across the country were put on hold last March, I had no idea that this is what life would become. I did not picture entering my high school classroom masked each morning, coating my hands in sanitizer after each doorway I step through, but this is life now. 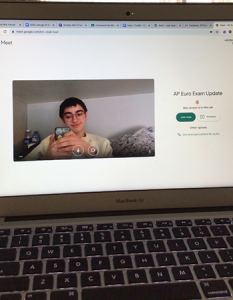 Waiting for online Social Studies class to begin.
I fell into a degenerate slump after the lockdown first began; I would lay in bed each morning, sleeping though my virtual classes, video calling friends constantly, and distancing myself from the responsibilities of the world. I did the least I could while still scraping by. I felt slighted, and as if none of it really mattered, life was put on hold, so I didn’t need to try. After a couple of months, I realized that being “alone” wasn’t really that bad. I love school and all the opportunities it has presented me but noticed that not being constantly surrounded by my peers allowed for self-discovery. Unfortunately during this period, I drifted away from my friends and the things that mattered most. Eventually, life began to look relatively normal again; school ended and the longest summer ever began, and without the pressure of courses nobody wanted to do I was able to get back in touch with both myself and everything that makes me who I am.
Throughout the pandemic, I worked as a cashier at a local grocery store. This was my connection to reality and one of the responsibilities I had to maintain. Working there meant that although I spent many days doing very little, there were always a few days a week I would brave the storm. I spent each evening watching the chaos unfold and consumer habits change. It was bizarre, as each shift there would be new item limits, cleaning protocols, or rules we had to enforce. I realized how incredibly understanding and nice people can be but also saw how terrible and rude they can become.

Even though I had festivals, performances, and a multitude of rehearsals cancelled, it all felt irrelevant—life had been cancelled.

The last thing on my mind during school last spring was the arts. Even though I had festivals, performances, and a multitude of rehearsals cancelled, it all felt irrelevant—life had been cancelled. I only focused on the absolutely mandatory aspects of my life, and with no marks or money to earn in regards to the arts, they fell out of my life for a while.
The announcement that Artstrek 2020 was cancelled hit me harder than most things. I was quick to accept the fact that I would no longer have a choir concert or sing my musical theatre solo at the local music festival, but to know that this year Artstrek was gone, hurt. I had attended Artstrek since I was 13, and after my first year I knew that this would be something I would attend every year. I needed to see the people who I so deeply connected with and only got to see then. I craved to learn and feel understood, to expand my mind and meet new people, to return to the place that so many of my most cherished memories were created. COVID-19 had me in a trapped state and Artstrek had always been the most freeing place, but now I couldn’t go there either. 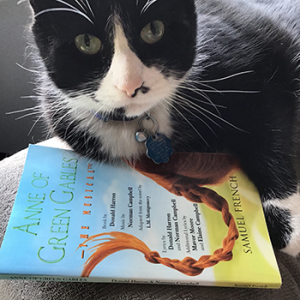 My cat Timothy helping me memorize my lines for Anne of Green Gables.
At the end of the school year, my school announced virtual auditions for the fall musical, Anne of Green Gables. It was like a door opening (even though I was extremely skeptical that the musical could occur)—this was an opportunity. Having been involved in my school’s theatre programs since grade seven and now entering my senior year, I was determined to take the lead. I was given an opportunity to put all my unlimited energy into something. I spent hours preparing and creating my audition tape, even though I knew the show might not take place. I was just glad I had a reason to indulge in the arts, even for a week or two at home.
After claiming the coveted role of Anne, I spent the summer memorizing my lines and songs—we were told we must be off book by the fall. I am still waiting to hear whether or not the show will happen, almost a month into school. The date has most definitely been pushed from November to May at the earliest but there’s still hope, an idea that someday, sooner or later, we’ll be on the stage.

There’s a strange atmosphere surrounding the students and staff, one that I hope dissipates soon.

Now that I am back at school, things are different, I’m different, but everyone is. I’m involved in fewer arts programs than ever before due to the risk and regulations of COVID-19. Classes are long and draining, partially due to the fact I haven’t attended them for six months and partially due to their two and half hour length. There’s a strange atmosphere surrounding the students and staff, one that I hope dissipates soon.
As life continues to return to “normal”, I hope more and more opportunities arise, regardless of how “normal” those opportunities are. I hope that the arts can continue to serve as an escape, as well as a method to heal. I hope that stories of these times continue to be told through as many methods as possible. Above all, I hope that being somewhat deprived of the arts, whether it’s the opportunity to present or to take in live mediums, has made us realize how important and impactful they are to our society and personal lives.

Nalyn is a grade 12 student at Camrose Composite Highschool. She is involved in her schools music and theatre programs and has taken part in many arts groups in her community as well.