Home » Blog » Who Are We Now? Essays From A New World – Inside Out Theatre

Who Are We Now? Essays From A New World – Inside Out Theatre

Who Are We Now? Essays From A New World – Inside Out Theatre

Our next essay comes to us courtesy Inside Out Theatre’s Point of View Ensemble with contributions from Meighan Wong, Jennifer Stewart, Mike Keir, and Damon Lawson, and support from Jeremy Park and Michelle Brandenburg. 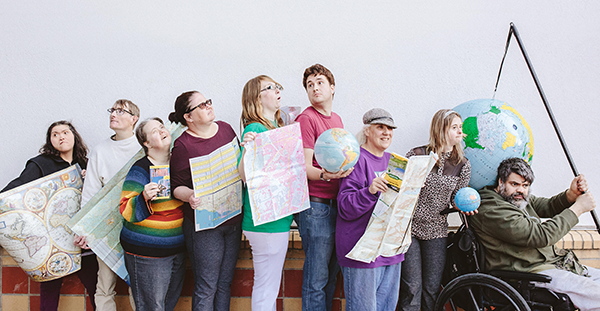 Point of View Ensemble members setting out to premiere their most recent work Most Imaginary Worlds. Photo by Mike Tan.

SCATTERED BUT STILL THERE – The Point of View Ensemble | September 2, 2020

In Mid-march, the members of Inside Out Theatre’s [IOT] Point of View performance ensemble were already a few months into crafting their next collective theatre piece. The now in-hiatus show, The Rude Mechanicals, was an exploration of the larger lives of Shakespeare’s iconic characters of Midsummer Night’s Dream, exploring parallels between the way the main characters poke fun at their performance, and way mainstream society may view performers in a disability theatre company such as ours. Many members were also preparing for Inside Out Theatre’s first participation in Emerge [Theatre Alberta’s annual general audition event for emerging artists].
Like the collective creations we make, we decided approach this essay as a group, with those who had the moment and the interest to contribute some reflections. With her feelings to the point, Meighan Wong wrote “I wish we were going back to normal! I miss you guys! I hope you can get things back to normal!” Ensemble member Jennifer Stewart touched on the particular experience of COVID restrictions for members of the disability community: 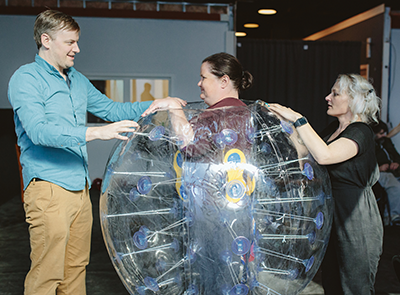 POV Directors Jeremy Park & Michelle Brandenburg outfit ensemble member Jennifer Stewart in her “Charlotte Bubble” Bubble in rehearsal for Most Imaginary Worlds. Photo by Mike Tan.
I was in Palm Springs in March and came back to Calgary when things completely changed in terms of the pandemic. Pretty much everything that had been my routine completely changed. Many things that I love are on hold or now I have to do in a different way. I have underlying health conditions as well, so I spend a lot of time at home to stay healthy and safe. One of the things that has tremendously helped is being able to still be creative and to still work on projects with the theatre company that I am with. I often wonder what it would be like if there were not things like social media or Zoom to stay connected and creative…Would everyone just slowly disappear from loneliness? I am from the disability community and I know the pandemic has been very hard on our group of people. Not everyone has access to technology or even to a smart phone due a lot of times to poverty. During this time, while a lot of us stay connected through different ways, through the arts or friends and family, many people do not.
~Jennifer Stewart
Thankfully, a majority of our ensemble members and participants of our community drama programs, had access to the technology needed to continue through Zoom. We were able to stream two showcase readings from IOT’s playwriting group over Facebook (They’re still there if you’d like to check them out) [facebook.com/IOTYYC]. A prolific and insightful playwright, Mike Keir had his play about the golden age of radio, Lights Out, read at the first one:
The first time I heard we were going to do a project over Facebook I wasn’t too sure of it because I don’t use Facebook or Twitter, but we did some play readings and boy was I wrong because I’ve had a lot of positive response. I’m glad we are continuing. With all the activity shutting down and restrictions in place, it can get quite depressing. They may have cancelled the Stampede and cancelled the Olympics, but they couldn’t cancel Inside Out.
~Mike Keir
Mike, as well as another long-time ensemble member, Damon Lawson, also reflected on the big question of who we are now, and what the future of theatre may hold:
To understand theatre as it is now, we must first briefly acknowledge what theatre was before. In the past, theatre was simple performance, presenting stories and emotions though the actions upon a stage for the masses to consume. But, since the virus, the use of a stage has become more deadly than normal, doubly so for masses to gather. By all accounts, this should have killed the theatre. And yet, it persists by the usage of video and online interaction. The theatre has changed its stage to a screen, with the masses scattered but still there. It gives hope for the actors and the viewers that theatre, like society itself, will survive the pandemic. Not to say that there will not be scars, for there will be many and I suspect that will take a great deal of time before we may return our screens to their holdings so that we may take to the stage again. But, once the calamity has passed and scars have faded, the masses will gather, and the stages will come live once again. Until that day, we will take to the screens for our masses, perform to our heart’s passion and be patient for that grand day.
~Damon Lawson 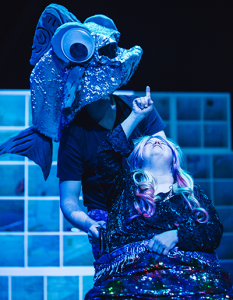 Gaelyn Thomson’s Mermaid stargazing in Most Imaginary Worlds. Photo by Mike Tan.
I know things look different now and that nobody knows what the future of theatre is, or the future of anything for that matter, but I’ll tell you that drama isn’t just performing in a big fancy theatre with a lot of filled seats. Drama is creating the project as well, and if you create, who really cares where or how you perform it as long as it gets to be seen?  As I said, I don’t know too much about Facebook but I do know if you put anything on there, it will be seen, which is good because at this time people need a bit of a distraction from what is going on and a play or story can provide that. I’ve watched a few plays online and it’s been very good, but I would say that I would thoroughly enjoy being able to go back to the theatre even if it’s just to watch a play. Dirty Laundry (the improvised soap opera) has been a big part of my life and it seems like it was ripped out from under me and all of us, but everybody’s going through loss right now. I’d just like to say you can lock me in my house and you can cancel things left and right but you won’t break the spirit of everyone trying to make the world work now.  I’d like to say that, when this whole thing started with the lockdown and everything, I was a bit depressed, but just knowing that things like drama [are] still going was enough to snap me out of it.  If I could say something to each and every drama company out there, let me close with this, let’s turn our cameras on and click the link and keep going.
~Mike Keir

The Point of View Ensemble is drawn from members of Inside Out Theatre, a Deaf and disability theatre company in sunny Calgary Alberta equally invested in artistic excellence, community development, and deepening our cultures’ accessibility.