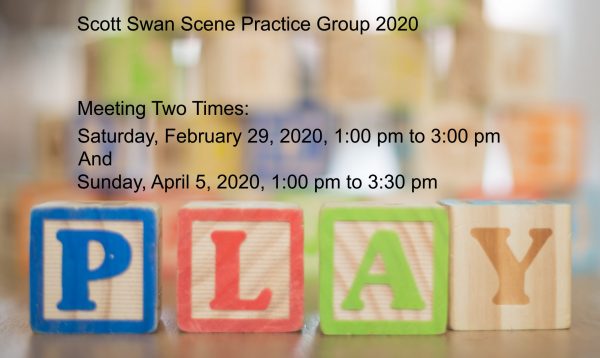 Seeking a few more actors who have basic training and performing experience to join our scene study practice group. Please note that this is a scene practice group, not a class. So it gives actors the opportunity to practice scenes together and receive feedback from guest directors. We will meet two times and introduce you to Scott Swan’s original acting technique that has been developed over decades at his acting studio in Vancouver. Actors who have already studied with Scott are also very welcome to join us. The scenes we work on will be from plays. However, the highly naturalistic acting style Scott’s technique encourages is an excellent foundation for actors in both on-screen work and theatre.

We would welcome actors to register, whether or not you have taken Scott’s classes. If you have not, we will introduce you to Scott’s techniques. We will meet two times: on Saturday, February 29 from 1:00 p.m. to 3:00 p.m. and on Sunday, April 5, from1:00 p.m. to 3:30 p.m. Pairs of actors will perform pre-assigned scenes at each meeting.

Note: Scott will not be present at these practice meetings. If you are not familiar with his techniques, you will be paired with one of his students who will introduce you to the technique and be your partner for working on the scene. If both actors are new to the technique, another actor will introduce the technique to you at your first rehearsal. This practice group is separate from the workshops that Scott himself regularly offers in Edmonton. If you would like information about those, please send an email to elaine@actingandtheatre.com.

You can register online on Eventbrite: https://www.eventbrite.com/e/scott-swan-scene-practice-group-2020-tickets-92141031305

There is a $52.88 registration fee covering the two meetings. The registration fee is being collected to cover the costs of renting a room, providing a small honorarium to the guest directors and for using Eventbrite for registrations and promotions. The organizer will make no profit from the event.

Benefits: Meet other actors, practice performing for an audience of your peers, and work with and meet local directors. Be introduced to the Scott Swan technique, an original Canadian technique created by Scott Swan, who was the founding artistic director of Northern Light Theatre in Edmonton and is currently Artistic Director of the Seacoast Theatre Centre and Principal and Head Teacher of Seacoast Studios in Vancouver.

Scott’s original acting technique has been developed over decades at his acting studio in Vancouver; and the highly naturalistic acting style it encourages is an excellent foundation for actors in both on-screen work and theatre.

More About the Technique: Scott Swan’s “three-time-through” methodology and conditioning exercises give your logical brain something to focus on so that it will get out of your way and allow your unconscious and the creative side of your brain to absorb the material for the scene. The technique also helps you to respond genuinely and creatively to the imaginary circumstances of the scene and to your acting partner. You will learn the text very quickly without ever focusing on text as text. You will know the scene in your bones; and from the first moment, you will build trust and connection with your scene partner.

In addition, Scott’s technique is an excellent foundation for both on-screen and stage acting. Scott teaches his acting students that they are enough and discourages expressiveness for its own sake. Instead, his technique helps the actor tune in to only the most honest impulses and emotions. Scott also teaches his acting students not to artificially project their voices but to allow the need to communicate and the physical space between the actor and the audience (in film and television, between the actor and the camera) to naturally determine how much the actor’s voice is projected. Scott’s technique does not focus on skills specific to film and television but will give you a very strong foundation for moving into the world of film and television.

Time-Commitment:
• Meet with your scene partner on your own time to work on one scene using Scott Swan’s three-time-through methodology and the conditioning exercises.
• Attend one two hour meeting and one two and one-half hour meeting.
• At one of these meetings (prescheduled), be prepared to perform your scene with your partner (off-book) and work with a guest director to further the scene.

Attendance: It is important if at all possible to attend both meetings. You will only be performing at one meeting, but we need to be present at both meetings so that all the actors have the opportunity to practice performing for an audience. You will also learn from the feedback the other actors receive from the guest director.