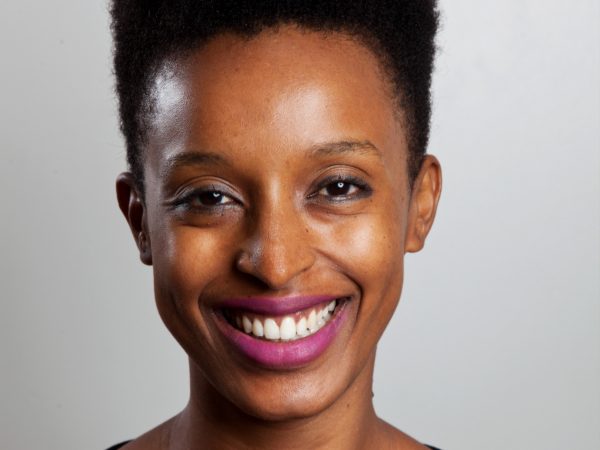 Obsidian Theatre’s Board of Directors and Search Committee are pleased to announce the appointment
of Mumbi Tindyebwa Otu as our next Artistic Director as of August, 2020.
Raised in Kenya and Victoria, BC, Mumbi is a critically acclaimed Toronto-based stage director with over
a decade of professional experience and is the Founder/Artistic Director of the Dora Nominated
experimental theatre company IFT (It’s A Freedom Thing) Theatre. Mumbi will join the company after
directing a string of successful productions, including: Oraltorio: A Theatrical Mixtape (Dora
Nomination), Obsidian Theatre/Soulpepper; Ma Rainey’s Black Bottom and The Brothers Size (Toronto
Theatre Critics Award), Soulpepper Theatre; Trout Stanley, Factory Theatre; Here are the Fragments, The
Theatre Centre/ECT Collective.
When asked about taking over the leadership of Obsidian she said:
“I am deeply honoured to be the next leader of this incredible company! Over the course of my career I
have been passionate about creating work that explores the depth and breadth of the Black voice in its
many artistic dialects, and having an opportunity to continue to do this within the context of Obsidian is
such a gift.”
Mumbi was recently named as one of the Top Ten Theatre Artists of 2019 by NOW Magazine and “one
of the most exciting directors of her generation.” She is the recipient of the Artistic Director’s Award
(Soulpepper), the Pauline McGibbon Award, the Mallory Gilbert Protege Award, a Harold Award, and
has been twice nominated for the John Hirsch Directing Award. She is a graduate of Soulpepper
Academy, York University and the University of Toronto, and an alumnus of Obsidian Theatre’s
Mentor/Apprenticeship Program.
“This also feels like such a full-circle moment. Obsidian gave me my first foot inside the professional
theatre scene in Toronto through the Mentor/Apprentice Program and has continued to be an important
artistic and cultural home for my growth as an artist ever since. I would not be where I am today as an
artist If I had not had the support of Obsidian, especially early in my career. I’m sure there are many
other Black artists in the country who feel the same. I am excited to continue the work of championing
and advocating for the work of Black artists, and training the next generation of theatre-makers.”
“I am full of gratitude to Philip Akin, Alison Sealy Smith and all the founding members – legends that built this company and have shepherded it ever since. We stand on their shoulders.”
A quote from Soulpepper’s Artistic Director Weyni Mengesha on Mumbi:
“Mumbi is a thoughtful artist who brings such focus and dedication to her work that it inspires great
work from everyone around her. She is also someone who thinks deeply about her role as a community
leader and how she can contribute. I am thrilled to see that she will be the new AD of Obsidian.”
The Search Committee, which was comprised of both board members and artists, engaged in two
rigorous hiring processes over the last 6 months, and are so very pleased to share the news of Mumbi’s
appointment as the next Artistic Director of Obsidian Theatre. Thank you to the members of the Search
Committee: Harmony Cohen (Chair), Regine Cadet, Marjorie Chan, Sascha Cole, Mel Hague, Kevin
Hanchard, Greg Holness, Nina Lee Aquino, Stacey Norton, and David Yee.
http://www.obsidiantheatre.com/
PrevPreviousEvent (Edmonton): The Exchange – Citadel Theatre
NextWorkshop (Edmonton): Clown & Mask IntensiveNext