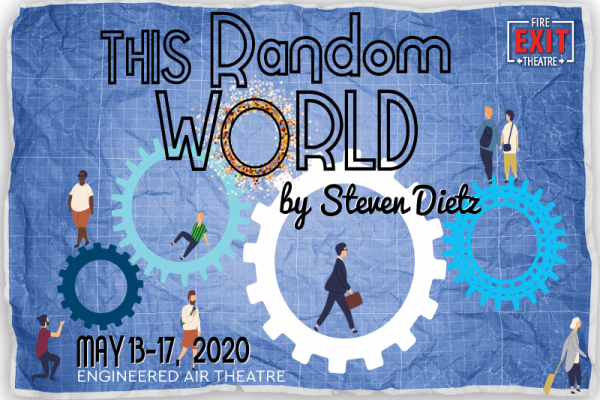 Through a swirl of nearly missed connections, an assortment of intersecting lives unfold in on each other. Journey along world-wide adventures, break-ups for the books, an internet prank gone awry and characters who ping-pong into, around, and away from each other. A story that makes space for the seemingly random connections and funny familiar investigations of what it is to lose, and be touched by the serendipity of life.

This Random World
By Steven Dietz
Directed by Heather Laubenstein

Rehearsal Schedule: Rehearsals will begin at the beginning of April, on evenings and weekends. Tech rehearsals are May 10-12th with performances running May 13-17th, 2020.

How to Prepare: Please prepare a contemporary monologue, one to two minutes in length. The monologue may by comedic or dramatic and should be something you are emotionally connected to rather than a “good character monologue.” Pick something that resembles you at your most truthful.

Roles: We will be auditioning for the following roles:

Scottie Ward: Female, 70+
A woman in her 70’s, she is private, quite withheld, intelligent, dry-witted, formal, but not a classic matriarch; she is sassy, feisty, enjoys a full, enriched world beyond the knowledge of her children.

Tim Ward: Male, 29-32
His girlfriend has broken up with him, his work is not going well, he is trying to figure things out. At his sister’s suggestion he puts a fake obituary into the paper and then can’t seem to take it back; he is sweet, still struggling to find himself.

Beth Ward: Female, 38+
Scottie’s daughter, white woman, generally obsessed with controlling her life, and her death, she is about to travel to Nepal, to go off radar and (maybe) to let go of the control; her defense is her best offense, she is appealing, likeable, but has an edge. Feels like a loud noise.

Bernadette: Female, 30-49
Scottie’s aide, a person of color, she is competent, reserved, but has energy and determination, starts to turn it loose when she can’t contact Scottie’s kids.

Rhonda: Female, 25-29
Bernadette’s young sister, a person of color, has become mystical since her mother’s passing, wants to believe in more than just this life, misses her mother.

Claire: Female, 29+
Tim’s ex-girlfriend, she never quite moved on after they ended their high school romance because it was the practical thing to do. She is a strong and confidant, not a fragile flower but has a bit of guile, hides the noise around her. Slightly haunting quality.

Gary: 35-45
Claire’s ex-boyfriend, he breaks up with her because she cannot live in the present, he takes a trip to Nepal in order to find excitement, but it doesn’t work out well for him.