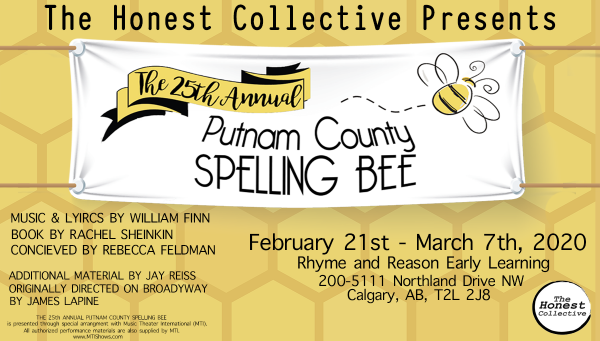 THE COMPANY & THE SHOW:

The Honest Collective is a theatre company in Calgary that works with emerging artists and focuses on honest performances and collaborative storytelling.

The 25th Annual Putnam County Spelling Bee is about an eclectic group of six mid-pubescents who compete for the spelling championship of a lifetime. While candidly disclosing hilarious and touching stories from their home lives, the students spell their way through a series of (potentially made-up) words, hoping never to hear the soul-crushing “ding” of the bell that signals a spelling mistake. Six spellers enter; one speller leaves! At least the losers get a juice box.

Additional production information, full rehearsal calendar, and audition sign up can be found on our website at https://spellingbee2019.wixsite.com/putnamauditions

Should you have any questions or other inquiries, please don’t hesitate to contact us at honestcollectivetheatre@gmail.com

The Honest Collective is committed to inclusive casting. We encourage submissions from artists of all backgrounds, walks of life, ethnicity, gender identity, sexual expression, ability, and/or those who self-identify as a member of underrepresented communities.

All auditioners are asked to prepare two contrasting musical theatre songs and a one minute comedic monologue. Please note that you may only be asked to sing one minute of each song and we may not need to hear both of your song choices. Please have an MP3 track for your song(s) as no piano or accompanist will be provided. Speaker playback only, and no acapella, please.

Rehearsals will begin January 6th, 2020 with performances starting February 21st, 2020. Please check the calendar on our website for the full rehearsal and show schedule. The rehearsal schedule is compact so performers are expected to come in familiar with the material, as we will be giving out the script and score in advance of our first rehearsal! Actors must be available for all rehearsal and performance dates, with exceptions made in certain situations for rehearsals as not all actors will be necessarily called to every rehearsal.

Please note that while weekday rehearsals start at 5pm, the first hour will be a flex time for personal warm ups, additional rehearsals, etc. This hour will be optional and cast will not be expected to arrive until 6pm.

Rona Lisa Peretti: Female, Late 20s – 40s
Soprano, with a very strong mix. Putnam County’s longtime spelling bee host and also the number one realtor in the county. A former spelling bee champion herself, she loves children but can be stern when necessary. Her interest in the competition is unflagging. Role requires excellent improvisational skills. (Also plays Olive’s Mom.)
​
Vice Principal Douglas Panch: Male, Late 20s – 50s
Baritone. Frustrated with life and awaiting a promotion, he returns to the Bee as substitute judge after a five-year absence due to an “incident” at the 20th Annual Bee. Though he finds the young spellers alien to him, he starts the day eager to redeem himself for past mistakes. Also, he is infatuated with Rona Lisa Peretti, but she doesn’t return his affections. Role requires excellent improvisational skills.

Mitch Mahoney: Male, 20s – 30s
Baritenor who can riff well. An ex-convict, Mitch is performing his community service as a “comfort counselor” at the Bee. He’s a tough guy who seems utterly unlikely to be at a spelling bee, or in a musical. (Also plays Dan Dad and Olive’s Dad.)

Chip Tolentino: Male, 16+
16+ to play preteen. Tenor. The reigning spelling champion, he expects things to come easy to him. Calculated, social, and a boy scout, he returns to defend his title, but he finds he’s been going through some weird changes that he did not expect. (Also plays Jesus.)
​
Leaf Coneybear: Male, 16+
16+ to play preteen, tenor. A second alternate with a severe inferiority complex, he deals with life by finding things amusing rather than stressful. Homeschooled and from a large family, he has severe attention deficit disorder but somehow achieves a trance-like state that allows him to spell words correctly. (Also plays Carl Dad.)

Logainne Schwartzandgrubenierre (Schwartzy): Female, 16+
16+ to play preteen. Alto/belter. The youngest speller, she is incredibly political, keenly aware of her surroundings, and driven by internal and external pressure. She wants to win to make her fathers proud. She is also somewhat of a neat freak and has a lisp.
​
Marcy Park: Female, 16+
16+ to play preteen. Soprano/belter. A recent transfer student who attends Catholic school, Marcy is a quintessential overachiever and comes from a family where excellence is expected. She speaks six languages, is athletic, and plays multiple instruments among her other talents. She keeps her problems to herself and is not allowed to cry.
​
Olive Ostrovsky: Female, 16+
16+ to play preteen. Soprano/high mixed belt to an F. A newcomer to competitive spelling, Olive loves words and spends time alone reading her friend, the dictionary. She’s alone at the Bee, as her mother is in an ashram in India, and her father is working late, as usual. Words bring her comfort and are exciting to her. She starts out enormously shy and begins to blossom.
​
William Barfee: Male, 16+
16+ to play preteen. Baritone. A finalist last year, he was eliminated because of an allergic reaction to peanuts and is back for vindication. Friendship surprises him today as he relies on his “Magic Foot” method of spelling that boosted him to spelling glory (even though he only has one working nostril and a touchy personality).