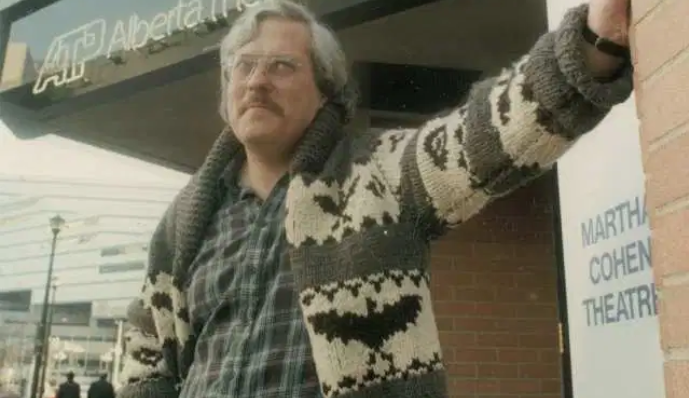 John Murrell at opening of New World in 1988. From the Calgary Herald Merlin Archive.
Playwright, librettist and Order of Canada recipient John Murrell has died after a long battle with leukemia. He was 74.
Murrell was born Oct. 15, 1945, in Lubbock, Texas. He moved to Calgary in 1968 to study at the University of Calgary, where he graduated with an education degree in 1969.
It was while teaching in public schools in Hanna and Calgary that he first began writing plays, winning the University of Alberta’s Clifford E. Lee playwriting award for his second play, Power in the Blood, in 1975. That same year, he became the playwright-in-residence for the fledgling Alberta Theatre Projects, where he produced one of his best known works, Waiting for the Parade, an episodic play about five Calgary women working on the home front during the Second World War.
Murrell built the play by interviewing people who lived through the war, but found he was most drawn to the story of the women who were at home while their husbands were fighting overseas. The play was remounted for ATP’s 45th anniversary season in 2016.
“He was a giant, in my view,” said One Yellow Rabbit artistic director Blake Brooker, who collaborated with Murrell on numerous plays. “He was an amazing polymath gentleman, a protean creator, translator and writer. He was a mentor to many people across the country, many writers. He was just an old-fashioned gentleman, in a way, with an incredible sense of humour and generous. Just a lovely person.”
Murrell also had several stints at the Banff Centre for Arts and Creativity, first from 1985 to 1989 as the head of the playwrights’ colony and then as the director of the theatre arts program from 1999 to 2007.
Murrell was made an officer of the Order of Canada and awarded the Alberta Order of Excellence in 2002. He also received the Governor General’s Performing Arts Award for lifetime artistic achievement in 2008. In honour of that recognition, animator Cam Christiansen produced a five-minute film for the National Film Board titled The Real Place.
READ THE FULL ARTICLE
PrevPreviousNews (Edmonton): Workshop West Playwrights’ Theatre Announces New Artistic Producer
NextNews (Alberta): Alberta Foundation for the Arts Welcomes New DirectorsNext
3rd Floor Percy Page Centre
11759 Groat Road
Edmonton, AB T5M3K6
Canada