Home » Blog » Editorial: For The Love of Community Theatre

Editorial: For The Love of Community Theatre

Editorial: For The Love of Community Theatre

I was recently posed with the question:  What is the importance of community theatre in the theatre ecosystem?  I didn’t think I had enough experience to formulate an opinion and isn’t ecosystem a scientific concept?  Science was never one of my strengths.  Ok, so once I wrapped my head around connecting ecosystem metaphorically with theatre and community, I could now begin to uncover how community theatre informed this larger so-called ecosystem.  After many Googles to access mandates, missions, values, etc. it became apparent that my best resources were going to be actual people, from all walks of life, who had been, or still were, involved in community theatre.  With the many I interviewed, they repeatedly revealed a sense of belonging to an extended family with each member passionate about the making of theatre and how they could help make that happen.  That yearning and commitment, along with a line from a community theatre website – We do It For Love, Not Money! – convinced me that perhaps I would discover the impact community theatre on the ecosystem by investigating my own journey first….

After unpacking my drama and dance background,  it turns out I did indeed have community theatre experience.  In the 1970’s, with the help of Ken Graham from Alberta Culture, and along with a number of other like-minded Sherwood Parkees, Park Players was founded.  We became an industrious theatre family learning about mandates, society status, lighting, set building, marketing, prop and costume making, Robert’s Rules of Order, and how to run a bingo!  As a relief from the left-brain rigours of community theatre, I also started performing with a musical theatre group called Edmonton Showtime.  This was truly a blissful decade full of ‘Love, not Money’! 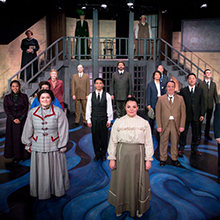 In the 1980’s I became part of many more community theatre families:  Walterdale Theatre (The Fantastiks, Map of the World}, the Cosmopolitan Music Society (Promises, Promises}, and numerous Edmonton musical theatre productions at the Citadel Theatre with Dasha Goody at the helm and Tommy Banks in the orchestra pit. All those involved, both on stage and off, became extended family as we put in countless hours, working on our craft – doing it for Love, not Money!  I also began attending Dramaworks, a summer program of drama workshops and intensives, sponsored by Alberta Culture (and eventually Theatre Alberta).  There I met many other community theatre folk, drama educators, and theatre artists all intent on honing their drama skills and who ultimately became my larger theatre family – part of an ecosystem  extending across the province.  Some made money at their craft and some not – but one thing was certain – all were doing theatre for the love of it!

It was during the 1980’s, when invited to join the semi-professional dance troupe Kompany! that I started receiving honorariums, not only for performing but for rehearsals too!  For five years I danced and sang my way across Canada, Ohio, Switzerland, Greece and Australia, and my personal ecosystem was getting much larger!

Finally, in the 1990’s, I hung up my dancing shoes to do a master’s degree in theatre movement, and to accept theatre related positions with Artstrek, Victoria School of the Arts, U of A, UBC, and numerous professional and community theatres.  I eventually landed in the theatre department at Red Deer College where community theatre folk continued to weave their way through my world, enriching it with involvement in college theatre initiatives. Theatre educators and students continue to hone their theatre chops with community theatre. And yes, doing it for the love of it – not money!

This, in part, is our theatre ecosystem – community theatre providing opportunities and a foundation for many within the larger structure of Alberta theatre.  Where people of all ages and walks of life form a family, driven by a passion for theatre and doing it for Love  – not Money!  Thank you, Community Theatre – you are worth your weight in gold!

If you are not yet part of the ecosystem and yearn to be part of a theatre family, I encourage you to connect with one of the many Alberta community theatre organizations.  AND, if you are attending the Community Theatre Summit Conference at Banff Centre October 17 – 20, 2019, hunt me down – I would LOVE to listen to YOUR journey within the ecosystem of Alberta theatre!

Yours in the spirit of the arts and community,
Lynda

Lynda Adams is a freelance theatre/dance artist, educator, and adjudicator and has taught in theatre departments across Western Canada. She was the Artistic Associate for Edmonton’s Northern Light Theatre (1996 – 2001). Lynda will be delivering a keynote address and participating in a community play creation panel at the upcoming Community Theatre Summit 2.0.