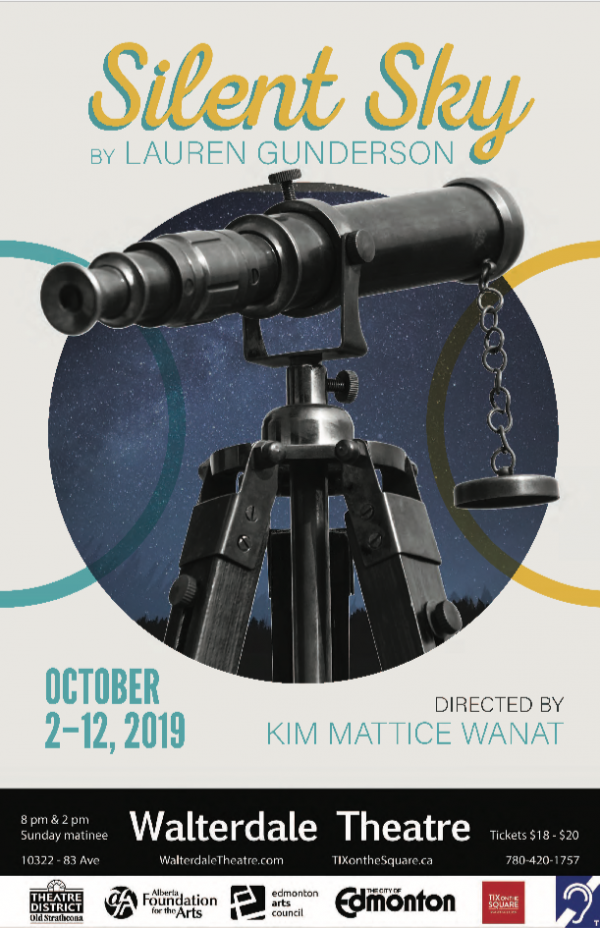 The true story of 19th-century astronomer Henrietta Leavitt, ​Silent Sky​ by Lauren Gunderson, explores a woman’s place in society during a time of immense scientific discoveries, when women’s ideas were dismissed until men claimed credit for them. Social progress, like scientific progress, can be hard to see when one is trapped among earthly complications. Henrietta Leavitt and her female peers believed in both, and their dedication has changed the way we understand both the heavens and the Earth.

Silent sky is a play about pursuing and living one’s passion. It centres around Henrietta Swan Leavitt’s love affair with the wonder of the vast sky, filled with countless galaxies. Throughout the play, Lauren Gunderson touches upon several age old struggles that mark our human history: the compelling debate of life’s meaning answered through science or religion; the question of a woman’s value in intellectual forums; the conflict of pursuing a career instead of establishing a family.
The audience is enveloped in a story of Henrietta Leavitt’s pursuit to know more about our existence. As we witness her insatiable thirst for profound knowledge, and her willingness to sacrifice comfort or acceptable societal norms in order to find answers, we are inspired to consider the importance of following our own passions and facing challenges with determined perseverance. ~Kim Mattice Wanat—Director

Don’t miss these special nights during the run of ​​Silent Sky ​​at Walterdale Theatre:

Some notes about the playwright:

Lauren Gunderson was named the most produced playwright in America by American Theatre Magazine in 2017. She co-authored the play ​Miss Bennet: Christmas at Pemberley​ with Margot Melcon, which received a 3-way world premiere in 2016. Lauren Gunderson is a playwright, screenwriter and short story author from Atlanta, GA. She received her BA in English/Creative Writing at Emory University, and her MFA in Dramatic Writing at NYU Tisch, where she was also a Reynolds Fellow in Social Entrepreneurship.

Walterdale Theatre, founded in 1958, is one of Western Canada’s oldest amateur theatre groups. With the exception of a paid part-time Administrator, Walterdale Theatre is operated entirely by volunteers with a love of theatre; members of any age and background have the unique opportunity to participate in all aspects of live theatre.
Walterdale website ​http://walterdaletheatre.com/the-2019-20-season/silent-sky/
For Silent Sky Tickets visit ​https://www.tixonthesquare.ca/events/2019/silent-sky/
Visit and share on Facebook ​https://www.facebook.com/events/2482537208469108/
Visit and share on instagram ​https://www.instagram.com/waltertheghost
PrevPreviousWhat’s On (Edmonton): Hole in the Sky – Script Salon
NextWhat’s On (Edmonton): Dirt Buffet Cabaret with Tim Mikula – Mile Zero DanceNext
3rd Floor Percy Page Centre
11759 Groat Road
Edmonton, AB T5M3K6
Canada