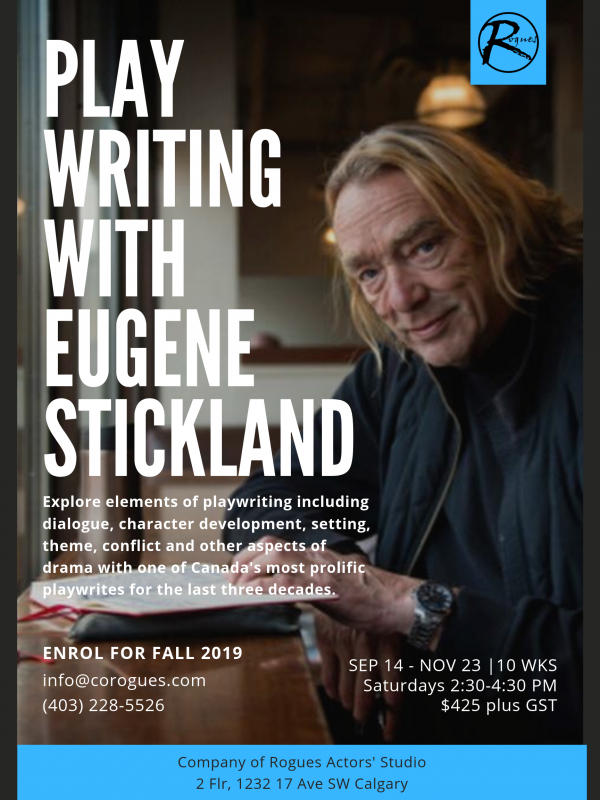 A workshop for those interested in writing for the stage. Through a series of practical writing assignments, we will explore elements of playwriting including dialogue, character development, setting, theme, conflict and other aspects of drama. Participants will be expected to read the work of fellow writers and offer constructive feedback. Our goal is for each participant to create one substantial scene that could eventually be developed into a complete play.

———————————–
Eugene Stickland has been one of Canada’s most prolific playwrights for three decades. At the same time, he has taught playwriting workshops at universities and theatres throughout the world, from Calgary to Singapore to Australia. Eugene is the author of Rogues Theatre’s hit production First and Last and is excited to join the Rogue’s family as an instructor.

Eugene grew up in Regina where he eventually worked on an MA in English at the University of Regina, which was interrupted when he went to Toronto to complete an MFA in Playwriting at York University. Following that, he wrote plays in Toronto for a number of years for the Act IV Theatre Company while at the same time working in a number of communications-related positions, including the editor of the Frontier College Press.

After a brief stint back in Regina in the early ’90’s, at which time his daughter Hanna came into the world, Eugene moved to Calgary in 1994, and enjoyed a 10 year stint as Alberta Theatre Projects’ playwright in residence, writing 6 plays for the company in that time, along with others for other theatres across Canada. After leaving ATP, he became a featured columnist for the Calgary Herald for the next five years while at the same time continuing to write plays for other theatres.

His plays have been produced around the world in several different languages. Queen Lear, which he wrote in 2009 for Calgary actress Joyce Doolittle on the occasion of her 80th birthday, went on to other productions in other cities, including a two year run in Istanbul and throughout Turkey (in translation). Eugene has completed several other projects, including a volume of poetry, Nocturnal Emissions, a play called Those White Things in the Ocean, and a novel, The Piano Teacher.

Eugene is the writer in residence at Calgary’s St. Mary’s University and he teaches a special communications course for internationally educated professionals, mostly from the world of medicine, at Alberta Business and Educational Services. He lives in downtown Calgary, proudly without a car. He is an avid cyclist and in winter a happy enough rider of public transportation.