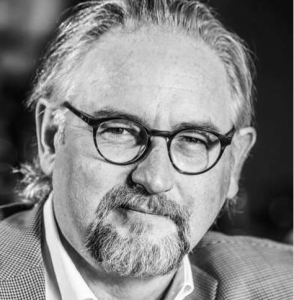 “Time to move on,” says Vern Thiessen of his decision after five years to leave his post as artistic director of Workshop West Playwrights Theatre, effective Aug. 31.
He won’t be leaving Edmonton, though. “I need more room in my life for writing and teaching,” says the  award-winning playwright (Apple, Einstein’s Gift, Vimy, Lenin’s Embalmers, Shakespeare’s Will). “That’s what gives me the greatest joy.”
I was never a lifer,” he laughs, on the subject of artistic directorship. “That would take a certain resilience I don’t have….”
Thiessen arrived in Edmonton in 2015 after seven years in New York, trailing a host of commissions and premieres from both sides of the border. It was a homecoming of sorts. He landed at the very theatre company where he’d gotten his first professional gig after university here (a post-graduate degree in playwriting from the U of A) some 25 years before. As Thiessen put it at the time, his career-launching assignment at Workshop West — as resident script reader and dramaturg — came at a moment when Workshop West was starting to get a national profile for its devotion to Canadian playwrights and their new plays.
And Thiessen has made his own internationally notable contributions to that repertoire. Apple alone has had more than a hundred productions world-wide.
The well-connected playwright, with an indefatigable zest for outreach and mentorship, has shepherded a number of new Canadian plays, and remounts, into the big wide world. Kenneth T. Williams’ Cafe Daughter continues to tour across the country and internationally.  With projects like This is YEG: New Plays For A New City — in which Thiessen invited eight Edmonton playwrights to be “embedded” in an city community that fascinated them and create from there — he’s re-fashioned Workshop West to reflect the greater cultural and ethnic diversity he found in Edmonton after his return. The company’s annual Canoe Festival has allied itself with Sound Off, the country’s first professional deaf theatre, and Black Arts Matter, an initiative to explore black culture and showcase its artists.
“What I’m most proud of, the project closest to my heart is #writesofpassage,” which mentors junior high and high school playwrights: “a thousand kids a year from 16 schools, in French, English, and Arabic.”
Meanwhile, Thiessen’s happy to lose the endless grant-writing paperwork that goes with being a theatre artistic director, and return to his life as an artist and teacher. “I’ve got a lot of teaching here lined up for next year,” says the playwright. “And commissions from the Royal Manitoba Theatre Centre an Stratford I want to finish.”
The company founded by Gerry Potter, which celebrated its 40th birthday a couple of weeks ago, has had more artistic directors than most of Edmonton’s small- and mid-sized companies. “And I think that (renewal) is a good thing. It’s been a great gig…. I have no idea who they’ll pick (to replace me),” he says, genially. “Someone younger and not as white as me!”
PrevPreviousNews (Edmonton): Students Recognized for Achievement in High School Theatre
NextNews (Edmonton): Complete List of 2018-2019 Sterling Award Winners and NomineesNext
3rd Floor Percy Page Centre
11759 Groat Road
Edmonton, AB T5M3K6
Canada