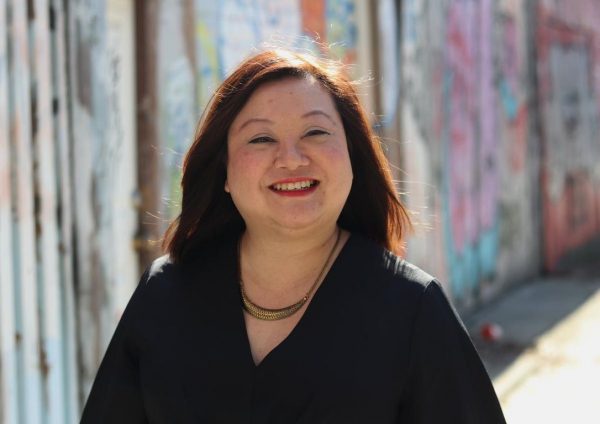 As Theatre Passe Muraille wraps up its 50th anniversary celebrations and its 2018/2019 season this month, the board of directors has announced who will lead the theatre company into the future: Marjorie Chan.
Chan, Toronto-born and a long-time, respected figure in the city’s independent theatre world, announced her departure as artistic director of Cahoots Theatre in late February, effective June 30.
Chan’s appointment is the latest in a theatre industry that is seeing leadership change across the city and another example of a position previously held by a white man going to a woman of colour.
Chan will take up her new position just up from the street from Factory Theatre, run by Chan’s predecessor at Cahoots, Nina Lee Aquino.
“It should be normal now,” Chan says about such changes.
In her six years as artistic director at Cahoots — a company with a mandate to produce work that reflects Toronto’s cultural diversity — Chan focused on increasing accessibility to the arts through programs like Crossing Gibraltar, a performance training program that works with refugees and newcomers in underserved neighbourhoods, and the Deaf Artists and Theatres Toolkit, an online resource to build stronger relationships between arts organizations and the deaf community.
“I didn’t know that I was going to jump to another artistic director job,” said Chan, who had already decided to move on from Cahoots before she accepted the position at Theatre Passe Muraille. “But I knew that there was work that I wanted to continue, and that Theatre Passe Muraille was well placed to continue some of that work that inspired me in my time at Cahoots but on a larger scale that has more impact, perhaps.”
Chan has already partnered with Theatre Passe Muraille on projects like Ultrasound by deaf playwright Adam Pottle, which she directed in 2016, and 2017’s John & Waleed, which featured cross-cultural conversation between two musicians, one from Kitchener, the other from Sudan.
“It’s a theatre company that I know, I know the people … It feels very organic and like I’m at home,” Chan said.
Outgoing artistic director Andy McKim focused on developing emerging artists and stabilizing the theatre company’s troubled finances (soon after McKim’s appointment, the City of Toronto bought the Theatre Passe Muraille building to alleviate the company’s $500,000 deficit). Chan’s experience in the independent world as a director, actor, writer, librettist, administrator and mentor (she won the George Luscombe Award for Mentorship in Professional Theatre at the 2017 Dora Awards) made her an industry favourite for the position.
“It was far from obvious to me,” she laughed. Without any experience managing a venue or working at a theatre company of Passe Muraille’s size, let alone leading it, Chan didn’t even apply for the job until the final day. But her pitch to the board of directors, in combination with the board’s consultation with the artistic community, cemented her selection.
“Coming through a lot of years when it was about survival, how can it thrive?” she said of Passe Muraille. “How can it be a leader in some things that I think it’s falling behind in? I think it’s quite critical that we don’t just welcome people, but we make people feel welcome.”
Passe Muraille has already made strides in accessibility for audiences; relaxed performances, ASL interpreted performances and audio descriptions are now standard practice.
“That’s not inexpensive to do, but it’s really critical and it’s a huge start,” Chan said, adding there’s plenty of room for improvement. “It is an old building, and for artists and audiences it’s not 100 per cent physically accessible. The washrooms are still gendered …”
Chan’s final season at Cahoots Theatre will be announced soon. She’ll officially join Theatre Passe Muraille on July 15 and begin planning the next season, for which she takes inspiration from the company’s name itself.
“Right now, Theatre Passe Muraille means to acknowledge that real walls, real barriers exist in society,” Chan said. “There are real systemic challenges and we need art that can pass through, that can be transgressive and can have the ability to communicate in spite of barriers.”
PrevPreviousArtstrek (Alberta): The Artstrek Newcomer Scholarship
NextAuditions (Edmonton): Simone et le whole shebang at L’UniThéâtreNext