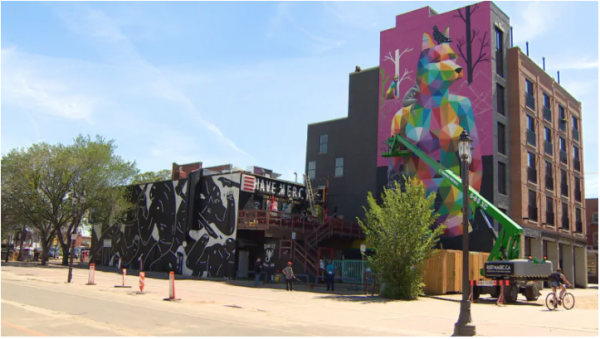 Do you have a powerful memory of Old Strathcona? The Secret City project wants to hear from you. (CBC)

Heather Cant is a curator of memories.
Cant is the founder and curator of Secret City, a community art project that profiles communities through the recollections of residents.
Part podcast, part theatre, Secret City explores the personal stories behind public spaces.
The memories profiled by the project are turned into a series of short audio plays, or podplays.
The confessions are intended to cast even the most unremarkable features of a neighbourhood in a new light, Cant said.
“That’s what we’re trying to do here, is really illuminate all the secret events and stories that people have about places that you pass through every day of your life, that you would never have an idea about unless that person told you their story.
“These are true stories about real events that really matter to someone — an extraordinary moment in their life that took place in a location that’s quite an ordinary place in someone else’s life.”
Cant, an experienced actor, director and theatre producer, has already brought the project to communities including Kamloops and Vancouver’s Robson Square neighbourhood. Her next stop is Old Strathcona in Edmonton. She’s asking current and past residents to share their secret memories of the neighbourhood.
But not just any memory will do.
Cant is looking for deeply personal, true stories that are tied to a specific place — a park bench, a light post, a building or an intersection.
From the submissions Cant receives, only a handful will be selected for the project.
Local artists will then work to bring the memories to life in a series of 10- to 13-minute episodes.
People are encouraged to listen to the podcasts as they walk through the neighbourhood and learn about events that took place there.
Cant said an episode from the Kamloops series is the perfect example of how a personal memory can give mundane objects new meaning.
“We have one story that takes place at a stoplight,” Cant said in an interview with CBC Edmonton’s Radio Active. “It happens to be the location where this couple got into a bit of a disagreement and that ended in them saying ‘I love you’ for the first time in their relationship.
“So now, that moment that is deeply personal to them is immortalized forever as a podplay.”
“Any time I happen to be in Kamloops and I drive through that stop light, that’s what I think about.”
Cant said it would be her “ultimate dream” to see the project expand to every city in Canada, allowing people to explore communities through the lens of those who live or have lived there.
She will accept memories of Old Strathcona until April 30. Unless they are officially selected, all submissions will be kept strictly confidential.
“I am the repository for peoples’ secrets and I take that confidence extremely seriously,” she said. “I want people to feel like they can share anything and be vulnerable in their storytelling.
“Some people have happy memories, some people don’t, and we want to treat those respectfully.”
CBC News
PrevPreviousNews (National): Funding Denied For NAC’s Indigenous Theatre Program
NextAuditions (Calgary): Trickster Theatre Open AuditionsNext