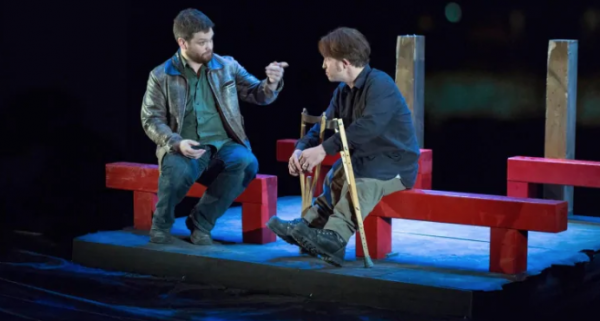 When the artistic director of Exit Theatre in San Francisco asked Paul David Power to bring his deeply personal show Crippled to the U.S. as part of their season, Power said he saw himself and his work in a whole new way.
But now, after two years of back-and-forth with U.S. authorities, Power and his production have been denied entry into the U.S. and that joy has turned to devastation.
“It made me feel, for one of the few first times in my life, good about having a disability, that I was doing something right. Having the guts to share such a personal story and personal experience — to be rewarded for that with an opportunity, it was beyond elating to me,” he said.
“For that to be taken away through some bureaucratic definition is heartbreaking.”
Crippled tells the story of a man with a disability who grew up in rural Newfoundland, hits rock bottom in St. John’s and then comes back from the darkness. Power, who has a disability that requires him to use leg braces and crutches, is the play’s writer and star.
“So I move uniquely, and I definitely do that on stage. It’s a great emphasis on how someone with a disability moves around on stage or adapts to their environment,” he said. “The play also delves into what it’s like to grow up with a disability.”
The U.S. has a complicated system involving a number of different visa classifications for international arts productions, Power said. He applied for Crippled‘s visa under the “culturally unique production” classification, arguing that people with disabilities are culturally unique and that the play presents this culturally unique group.
“We have unique experiences when it comes to life. We have unique challenges that we have to deal with every day that the general population doesn’t have to. We have unique language,” he said, adding that with him as the lead actor, all of that is part of the story and production of Crippled.
Power notes that the system is so complicated, many artists try to avoid it entirely and say they’re just visiting when they cross the border to perform.
After two years of paperwork and pleading his case, U.S. authorities said last week that the classification didn’t fit and denied the visa.
“I feel that the issue is there’s a lack of understanding of disability artists or disabled people in general. We are definitely culturally unique group,” he said.
“And here we are, a group trying to do everything legally and on the up-and-up. And, basically, I feel we got slapped in the face for it.”
Since the show was denied entry, Exit Theatre started a petition aimed at Speaker of the U.S. House of Representatives Nancy Pelosi, which asks for a reversal of the decision and a better system for international artists.
“It is virtually impossible for indie theater artists from another country to perform legally in the United States,” the petition reads.
Power says the uprising from both the Newfoundland and the San Francisco theatre communities has been one of the only good things about the ordeal and he hopes his experience brings about some real change — not just for Crippled, but for international artists hoping to share their work in the U.S.
“My community has been wonderful. If anything it’s made me feel so good that everybody seems to be outraged and supportive and speaking out about it. And that makes me proud to be a Newfoundland artist. And I feel very very supported here,” he said.
PrevPreviousAuditions (Edmonton): NAIT Student Short Film
NextJob (Calgary): Artistic Producer – Lunchbox TheatreNext