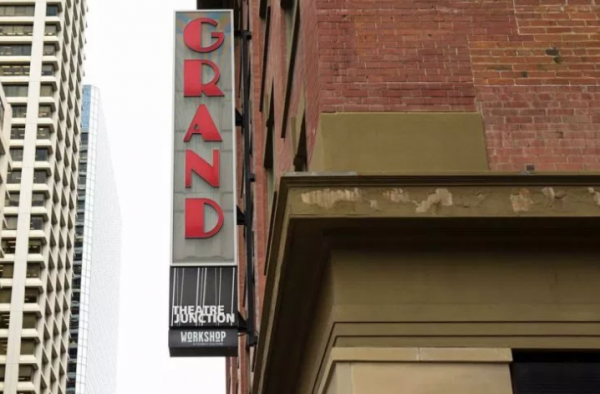 The rebranding of The Grand has begun in earnest.
Back in December, the new CEO of The Grand theatre complex promised the historic building would be revitalized, making it a more friendly, accommodating and welcoming member of the local arts scene.
On Monday night (Jan 28) the excitement was palpable as Tony McGrath made good on that promise, introducing the first two theatre companies taking up residency at The Grand.
Black Radish and Making Treaty 7 Cultural Society have agreed to make their homes at The Grand.
Duval Lang, speaking on behalf of his Radish partners Christopher Hunt, Andy Curtis and Tyrell Crews, says it’s pure serendipity that their company was the first to secure a home at the downtown theatre.
“It’s a lot of good luck, good fortune and good energy that we’re at The Grand. The four of us desperately want to do Samuel Beckett’s Waiting for Godot to introduce our company to the community.
“We were planning on doing it at the new cSPACE King Edward, but its little theatre didn’t really suit the play,” says Lang recalling “it was then we heard about the rebranding of The Grand and Dave Kelly’s team introduced us to the possibility of using it. (They) outgrew the 400-seat theatre, but had loved performing there and assured us we would, too.”
Lang and his fellow Radish members were encouraged by McGrath’s insistence that “the new leadership at The Grand was looking for theatre companies which would be more friendly and more community-minded and that’s who we are.”
Black Radish will present Waiting for Godot at The Grand April 12 to May 6.
The Making Treaty 7 Cultural Society was also looking to set down some roots.
“We’ve gone from one little shoebox to a bigger shoebox, but we still didn’t feel grounded,” said artistic director Justin Many Fingers. “We needed to create a more sustainable model and we were actively looking for a new place to call home when the news came out that The Grand was looking for new tenants.”
Many Fingers says he wanted desperately to get into The Grand. “I spent a lot of time researching exactly what it was the new leadership was looking for and I discovered we were a perfect match for them.”
He points to The Grand’s 100-year-plus legacy as a performance house in Calgary stressing “this building is a place to create and celebrate culture and it’s vital that an Indigenous company be part of this building and its legacy.”
Both Lang and Many Fingers say their companies want to create more than just plays. They want to host events and, as Many Fingers puts it, they plan to “bring all elements of society to all the corners of this building.”
With this residency, Making Treaty 7 Cultural Society is only the second Indigenous resident company in Canada, the first being The Native Earth Performing Arts in Toronto.
“With Making Treaty 7 having its home at The Grand, other Indigenous companies and Indigenous artists know there is a home base that will welcome them and their projects.”
Making Treaty 7 has shows planned for the fall and will release details later this spring.
McGrath says he is open to hearing from other companies that might want to become part of The Grand’s new family.
PrevPreviousNews (Alberta): Lauren Crazybull is Alberta’s First Artist In Residence
NextWhat’s On (Camrose): Joseph and the Amazing Techincolor Dreamcoat – About Time ProductionsNext
3rd Floor Percy Page Centre
11759 Groat Road
Edmonton, AB T5M3K6
Canada