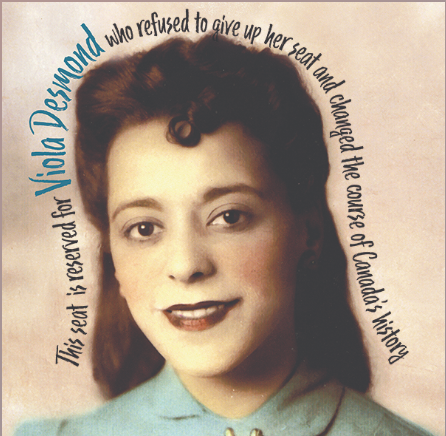 Save a Seat for Viola

At a time when disheartening levels of racism have been increasing globally, Black History Month recognizes a history of systemic injustice and celebrates the community responses and honours current and past activists.
Alberta Media Arts Alliance Society (AMAAS) is acknowledging Black History Month with a Viola Desmond recognition campaign at participating Alberta cinemas. The Globe Cinema (Calgary), Central Public Library (Calgary) and Metro Cinema (Edmonton) will “Save a Seat for Viola” as part of the campaign. A selected seat in each theatre will be claimed by a sign with a likeness of Ms. Desmond, describing her story to cinema-goers. Each cinema will also have additional promotional materials for the public throughout the month of February.
In 1946, Viola Desmond challenged racial discrimination when she refused to leave the segregated Whites-only section of the Roseland Theatre in New Glasgow, Nova Scotia. Viola was arrested, jailed overnight and convicted without legal representation for an obscure tax offence as a result. Desmond’s courageous refusal to accept an act of racial discrimination provided inspiration to later generations of Black persons in Nova Scotia and in the rest of Canada.
Viola Desmond’s story has been amplified with her recent placement on the Canadian $10 bill, but hers is not the only historical example of early black activism in Canada.
Melanee Murray-Hunt, a local actor and social justice activist, played the role of Carrie Best in Historica Canada’s Heritage Minute.
“Behind every great black female activist is another great black female activist. The woman behind Viola Desmond, the woman who was the first to sue for the right to sit at the illegally segregated movie theatre in Nova Scotia, was Carrie Best,” said Ms. Murray-Hunt. “She launched one of the first black newspapers and was the first person to bring public attention to Desmond’s case against the theatre. Their solidarity and struggle for the rights of Black Canadians – indeed all Canadians everywhere – is a lesson in how sisterhood, unity and focused action did and does make a difference.”
An early civil rights case in Calgary was recently unearthed with the story of Charles Daniels, who was refused a seat in the ‘white only’ section of the Grand Theatre in Calgary in February 3, 1914, and sued for damages, and won.
“We hope that this campaign, and the telling of the story of Viola Desmond, continues to inspire Canadians to fight for justice and equality, and to recognize that small acts of defiance can have great impact on systemic issues,” said Sharon Stevens, Executive Director of AMAAS.
http://www.amaas.ca/
PrevPreviousJob (Calgary): Summer Drama Day Camp Counselors – Pumphouse Theatre
NextJob (Calgary): Dance Instructor – StoryBook TheatreNext