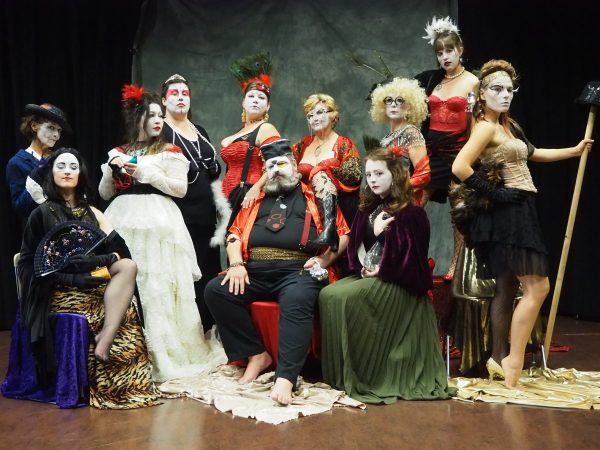 In the European tradition of clown duos, the confident leader is called the Joey
and the vulnerable follower is the Auguste.

In this workshop you will:
• Invoke the most extreme forms of these two archetypes.
• Discover the full spectrum of your clown’s emotional/physical range.
• Deepen your relationship to the audience
• Increase your stage presence
• Discover material that emerges from the dynamic Joey/Auguste relationship

JAN HENDERSON is one of Canada’s leading clown and mask teachers and directors. She studied and performed extensively with master teacher, Richard Pochinko, before co-founding with him what is now the Theatre Resource Centre, Toronto. From 1982-91 she was co-artistic director and performer with internationally acclaimed Small Change Theatre, literally clowning her way around the world, discovering first hand that laughter is the universal language. Jan teaches at Grant McEwan University, Toy Guns Dance Theatre, and the University of Alberta, where she has received four awards for excellence in teaching. Her work is featured in the documentary Phyllis’s Miracle, the NFB film To Be A Clown, and the U of A films, The Art of Clowning and Clown and Mask. Jan is on the Creativity Faculty of the Leadership Development program at the Banff Centre, and is a recipient of Global Television’s 2005 Woman of Vision award. In 2014 she was nominated for an Outstanding Lifetime Achievement Award for the Mayor’s Celebration of the Arts, and she received the 2018 Elizabeth Haynes Stirling Award for Outstanding Contribution to Theatre in Edmonton. Jan directs for Girl Clown Theatre and is also co-artistic director of Small Matters Productions, whose shows have toured to festivals in Western Canada, the Toronto Festival of Clowns, and the New York International Clown Theater Festival. After a twenty-five year hiatus, she recently returned to the stage in the popular clownesque comedy, Over Her Dead Body, for Edmonton’s Fringe Theatre Adventures, and she is the subject of a new documentary, now in production, called the The Wise Fool.

CHRISTINE LESIAK is an Edmonton-based theatre artist, and co-founder of Small Matters Productions. She holds a Masters of Fine Arts in Drama from the University of Alberta and a BSc in Physics. She has taught clown, physical comedy, and performance within the Drama Department at the University of Alberta, Edmonton Digital Arts College, in public schools, and in private workshops. She is co-creator of and performer in Small Matters’ six full-length clown shows, including Over Her Dead Body (2017), the 2018 Edmonton Fringe holdover hit, For Science!. Christine has created and performed, and directed countless short clown works and performed across Canada and in New York. She is a frequent collaborator with Catch the Keys Productions (Dead Centre of Town, 900 Seconds, The Runcible Riddle). She facilitates & produces the monthly Small Matters Physical Comedy Lab, and is the program director of Play the Fool, Edmonton’s festival of clown-theatre and physical comedy. www.smallmatters.ca