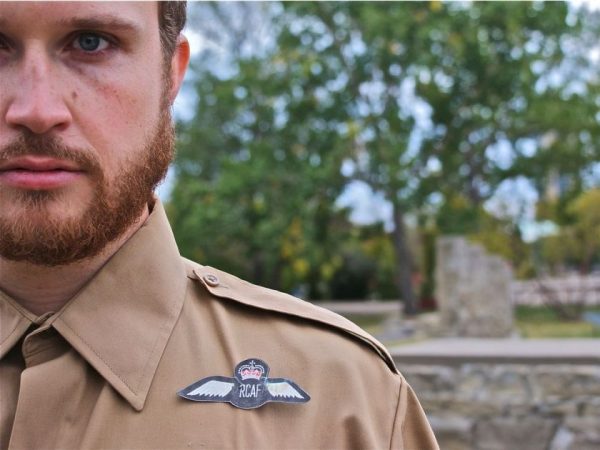 Owen Bishop in his play Half the battle, which is part of Sage Theatre’s Stepping Stone Project. Courtesy, DIY Theatre | Owen Bishop CALGARY

Calgary actor Owen Bishop will take all the pushing and even shoving that he can get.

Bishop’s one-man show, Half the Battle, is the inaugural production in Sage Theatre’s new Stepping Stone Project, in which Sage assists emerging artists in their transition to professional theatre.

Bishop wrote and presented the first draft of his solo show as his final project at Vancouver’s Studio 58 theatre program in 2015.

“For our final project, theatre students have to create a solo show which they write, direct, design and perform. I instantly knew what I wanted to use as the basis of my show. It was a concept that I had been mulling over since 2009 when my social studies teacher in Edmonton took a group of students to tour the Canadian battlefields in Europe,” says Bishop.

“What struck me was that (after) a Canadian pilot and co-pilot were shot down, their tombstones were (put side by side). I couldn’t get rid of that image. I kept thinking how ironic it would be if these guys hadn’t liked each other. They’d be spending their eternity stuck together.”

For Half the Battle, Bishop plays Adams, a pilot from Newfoundland and Davis, his co-pilot from Alberta.

“They are your archetypal odd couple. David is the neat and tidy guy and Adams is the messy guy and that’s also reflected in their personalities.”

As Adams and Davis bicker and even fight, they reveal why they are fighting and what they have left behind and the audience observes the transitions in their relationship.

Bishop says his play is more than a character study.

Calgarians will be treated to the third incarnation of Bishop’s Half the Battle as it has grown in length and subject matter. The college project was 20 minutes long and a much-praised Edmonton Fringe Festival version in 2016 lasted 35 minutes. This latest version which Bishop created for the Stepping Stone Project runs just under 60 minutes.

“I feel really privileged to be the first artist in this program. Sage has given me a really super team as well as a great deal of advice and encouragement.”

This version of Half the Battle is directed by Shelby Nicole Reinitz.

Since Bishop relocated from Edmonton to Calgary he has worked with smaller independent companies in Genesis: The Mary Shelley Play, Closer and Stupid Bird.

Tickets for Half the Battle, which is a co-production with DIY Theatre, are available at diytheatre.org/half-the-battle/.