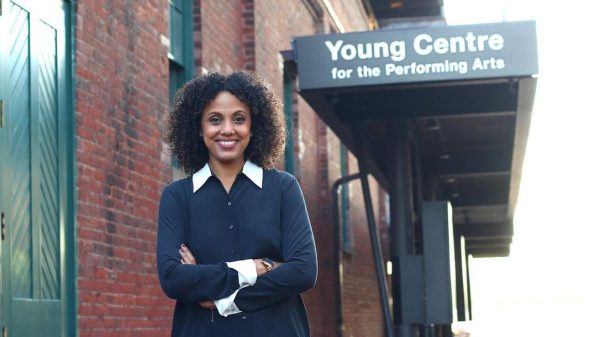 Weyni Mengesha, who kicked off her career directing ‘Da Kink in My Hair, which became an international hit, returns to Toronto to take over as artistic director of Soulpepper Theatre Company. (DANIEL MALAVASI/SOULPEPPER)
Carly Maga | Toronto Star | October 11
It’s a new era at Soulpepper Theatre.
The company announced Thursday that acclaimed Canadian director Weyni Mengesha will become its artistic director, starting in January. Paired with the hiring of UK-based arts administrator Emma Stenning as Soulpepper’s new executive director in August, Toronto’s largest not-for-profit theatre company will now be led by two women after a year rocked by legal and internal discord.
Former artistic director Albert Schultz and executive director Leslie Lester left the company in January after four women sued both Schultz and Soulpepper over claims of sexual harassment and assault in an unhealthy professional environment. The lawsuits, which were settled over the summer, sparked an industry-wide conversation on sexual harassment in theatre.
A committee comprised of six Soulpepper board members, consulting with two artist advisers, hired Searchlight Canada to conduct a search of Canadian candidates at home and abroad. Of the nine shortlisted candidates, four were women and three were persons of colour.
Mengesha was a popular name in the running for the job, a beloved local director with a long history at Soulpepper. She completed the directing stream in the Soulpepper Academy before directing A Raisin in the Sun, the audience favourite Kim’s Convenience and the Dora Award-winning Father Comes Home From the Wars for the company. Elsewhere, she directed the indie hit-turned-Off-Mirvish production of Nicolas Billon’s suspenseful thriller Butcher, the sprawling Breath of Kings: Rebellion at the Stratford Festival, and the production that kicked off her career, Trey Anthony’s ’Da Kink in My Hair, which started at the Toronto Fringe Festival in 2001 and went on to fill the Princess of Wales Theatre and tour internationally, culminating in a TV series on Global.
Mengesha has remained an important artist in Toronto, straddling both the independent and commercial sides of the industry with an impressively reliable track record in both box office and critical success, despite being based in L.A. with her husband, actor Eion Bailey, and their two young boys. When Soulpepper Theatre hired two associate artistic directors in 2016, Mengesha turned the opportunity down to continue growing her experience directing for film and television, as well as forming relationships with U.S. theatre companies. Now it’s time to come home.
“It’s full circle, it really is,” the Vancouver-born Mengesha in an interview on Wednesday. When asked what excites her about returning to Toronto, she responds: jerk chicken, seasons, the poetry scene, her parents, and her community.
“My girlfriends said we would all live on the same street and our kids would play together,” she laughed. “They all did that, and I moved away.”
Full Article: https://www.thestar.com/entertainment/stage/2018/10/11/soulpepper-theatre-names-weyni-mengesha-as-its-new-artistic-director.html
PrevPreviousNews (National): Michael Greyeyes to Receive 2018 August Schellenberg Award of Excellence
NextNews (Alberta): BroadwayWorld.com Announces First Annual Alberta Theater AwardsNext
3rd Floor Percy Page Centre
11759 Groat Road
Edmonton, AB T5M3K6
Canada