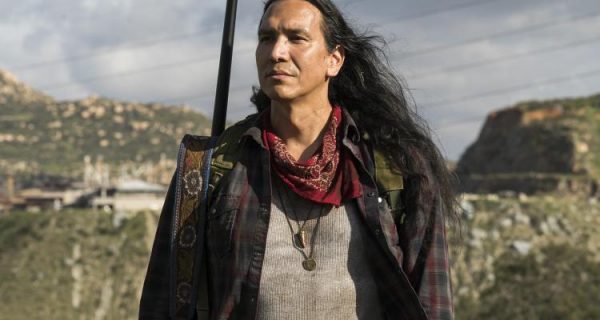 The August Schellenberg Award of Excellence (the “Augie”) is an annual prize that recognizes significant professional and personal achievement by an Indigenous actor, of any gender, from Turtle Island (North America). Michael Greyeyes will receive his award at the imagineNATIVE Film + Media Arts Festival’s Awards Presentation on Sunday, October 21 at the TIFF Bell Lightbox.

“August ‘Augie’ Schellenberg is an icon, but to me he is much more than this,” says Michael Greyeyes. “Augie was my friend and mentor. In his work, and the way he lived his life. I learned from him in countless ways. This award is a profound honour and affirms that Augie’s commitment to excellence and his spirit of generosity remain with me.”

In a career spanning 31 years, Michael Greyeyes has moved fluidly between stage and screen, from his work as a dancer with The National Ballet of Canada to diverse performances in Bruce McDonald’s Dance Me Outside, to his title role in Crazy Horse (TNT), and for acclaimed directors such as John Sayles, Chris Eyre, and Terrence Malick.

His selected directing credits include: Pimooteewin (The Journey), the first Cree language opera with libretto by Tomson Highway, Almighty Voice and his Wife (Native Earth Performing Arts) and Seven Seconds (2010 imagineNATIVE). In 2010, Greyeyes founded Signal Theatre and has created a number of full-length theatre works, including from thine eyes, Nôhkom, and A Soldier’s Tale for the National Arts Centre, and Bearing, a searing exploration of Canada’s Indian residential school legacy for the 2017 Luminato Festival. He is an Associate Professor in the Theatre department at York University, where he teaches devised theatre and screen performance. Professor Greyeyes is published in the Canadian Theatre Review, Theatre Research in Canada, and Performing Indigeneity: New Essays on Canadian Theatre, Vol. 5.