Home » Blog » Auditions (Calgary): Once Upon A Christmas & Ghouls’ Night Out – Heritage Park

Auditions (Calgary): Once Upon A Christmas & Ghouls’ Night Out – Heritage Park

Auditions (Calgary): Once Upon A Christmas & Ghouls’ Night Out – Heritage Park 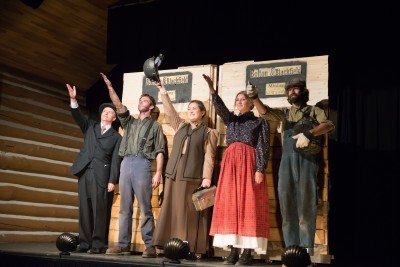 ONCE UPON A CHRISTMAS & GHOULS’ NIGHT OUT AUDITIONS at HERITAGE PARK

The Heritage Park Players will be presenting various interactions, plays and musicals around Heritage Park for its 2018 Once Upon A Christmas and Ghouls’ Night Out Halloween events. Actors may submit for roles in both Christmas and Halloween as rehearsals and performances will not conflict.

The Heritage Park Players will be presenting various interactions indoors and outdoors around Heritage Park for its 2018 Ghouls’ Night Out Halloween Event.

Jack investigates the remains of an Imperial crashed space shuttle, making away with some precious diamonds. A Sith Lord awakens from crashed cock-pit to challenge Jack to an epic lightsaber fight to Pirates of the Caribbean style music.

Audrey 3, a new breed of plant life unknown to this planet, attempts to convince Seymour to feed him with Zombie body parts. They sing a parody of song bits from Little Shop of Horrors.

Zoltar the Fortune Teller vs Esmerelda the Gypsy

Similar to the booth from the movie “Big”; guests will line up to have Zoltar tell them their fortune. He is competing for business with his nemeses Esmerelda the Gypsy.

A girl/lady escapes from a coffin only to discover the wonders of becoming a new Vampire. She sets on a course of making her first kill, her beloved cat Charles. She then begins the establishment of a blood donor clinic for Vampires of all types.

Script by: Trevor Matheson
Play Run Time: 15min
The Addams Family take you on a tour of their home culminating in a family dinner.

Script by: Melissa Dorsey & Trevor Matheson
Directed by Melissa Dorsey
Play Run Time: 20 minutes
Shaggy and Scooby recount one of their adventures into exposing a fraudulent medium trying to scan people out of their money.

HALLOWEEN REHEARSALS:
Rehearsals will begin Sunday, Sept 9 and will continue until the first performance on Thursday, October 25.

There will be 2 – 3 rehearsals a week and actors will only be called as needed. They will consist of evenings (6:30pm-10pm) and weekends (various times) subject to the actor’s availability.
Rehearsals will be held at Heritage Park.

HALLOWEEN PERFORMANCE INFO:
Call time will be one hour before.
Performers will be released after hanging their costume from their last performance of the day.

ONCE UPON A CHRISTMAS

The Heritage Park Players will be presenting a new musical in the Opera House at Heritage Park for its 2018 Once Upon A Christmas Event.

SYNOPSIS:
Maxi’s Music Hall’s headliner band for the Christmas Eve Concert is stuck in Winnipeg. Will small-town girl Beverley be good enough to do it? Will it be left up to the rest of the backstage crew to fill in the act? Or will Christmas Eve be cancelled?

CHRISTMAS REHEARSALS:
Rehearsals will begin Sunday, Sept 9 and will continue until the first performance on Saturday, November 24.

There will be 2 – 3 rehearsals a week and will consist of evenings (6:30pm-10pm) and weekends (various times) subject to the cast’s availability.
Rehearsals will be held at Heritage Park.

CHRISTMAS PERFORMANCE INFO:
There will be 4 performances a day in the Opera House at Heritage Park on Saturdays & Sundays starting Nov 24 and concluding Dec 23.

Performers will be released after hanging their costume from their last performance of the day (around 4pm).

The show will be double cast. We will have a Saturday cast and a Sunday cast. If you wish to be considered to perform both Saturday and Sunday shows, please include that in your submission.

AUDITION REQUIREMENTS:
Prepare given sides (to be sent upon audition confirmation.)
CHRISTMAS ONLY: One ragtime-feel song or Christmas carol. Please prepare only a 60sec selection of your piece.
AUDRY 3/SEYMOUR ONLY: A 60sec selection of an upbeat musical theatre song to demonstrate your abilities.
If auditioning with a song, please bring your own accompaniment. A CD player and a headphone jack will be provided. No accapella.

Only those selected to audition will be contacted with an audition time. Heritage Park is committed to diverse, inclusive casting. Both Ragtime Christmas and Ghouls Night Out are volunteer performance contracts. Equity members will not be seen at these auditions.