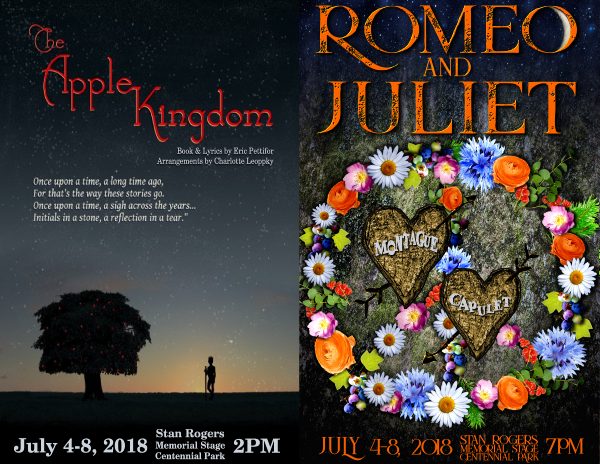 Artists’ Collective Theatre is proud to be producing two shows in repertory for the Canmore Summer Theatre Festival July 4-8, 2018

Book & Lyrics by Eric Pettifor, Arrangements by Charlotte Leoppky
A fantasy/musical, this fairy-tale tells the story of a young king whose kingdom was so small he was mocked by the other kings of the world. In exchange for power he promises the witch his first born daughter on her 16th birthday. But though the witch delivers on her promise, when the princess nears her 16th birthday, the king regrets the deal he made so many years ago. Can he save his daughter? Can the prince who woos his daughter help? Might help come from an unexpected quarter, the familiar of the witch, a giant, bipedal talking Lizard? The ensemble supports the action by playing spies, minstrels, talking trees and making the whole environment come very much alive.

The Young King (singing role, male 18-20+*): The Young King who makes the deal with the Witch thus beginning the whole story.
The Old King (singing role, male 30+*): The king nearly 16 years later, possessing great power and greater regret.
The Lizard (singing role, metso, male or female, all ages): Zama Kor’s familiar, this sassy, trouble making reptile is never far from the action. Strong physical actor required.
The Witch Zama Kor (metso-soprano, female 20+*): A power house both on stage and vocally, a strong singer with belting ability is needed.
Prince Aldric (baritenor, male 14+*): Lots of physical comedy is needed for this role.
Princess Catherine (metso, female 14+*): She is a strong willed young lady with a heck of a personality whose ability to question authority, even that of her father, keeps her from becoming an ingredient in a diabolical beauty cream.
Ensemble (varying singing voices, all ages): Varying singing voices. These roles have lots of movement, possible puppetry, masque work and dancing. Providing tones of comedic relief.
*Please note: Age ranges are approximate and that the actors don’t necessarily have to be in that age range to play the part.

All actors must come to the audition prepared with the following:
1 contemporary monologue & 1 Shakespeare/classical monologue
16 bars of a musical theatre OR contemporary pop song OR classical song that shows your range

Artists’ Collective Theatre does not and shall not discriminate based on race, religion, gender, gender expression, age, or sexual orientation. All actors cast will perform in both Summer shows. Accommodation will be provided to those out of town.

Please submit your headshot and resume to auditions@acttheatre.ca with the subject heading “Canmore Summer Theatre Festival Auditions – (YOUR NAME)”. Auditions will take place in Canmore, Alberta. We will also accept video submissions if you are unable to attend the auditions in person.