Audition (Edmonton): Next to Normal

Audition (Edmonton): Next to Normal 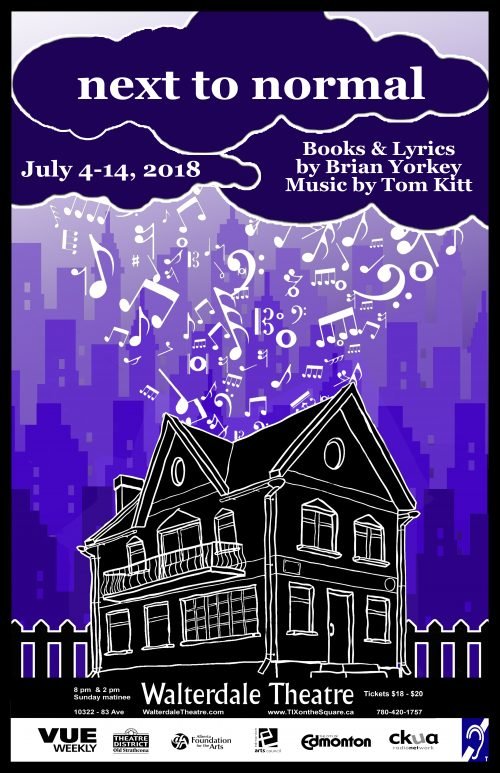 Auditions are scheduled for April 8 and 9th in the evening (6-9:30pm). Callbacks (if needed) will be on April 14 in the afternoon (1-4pm). Auditions and callbacks will be held at Walterdale Theatre.

Please prepare a selection from a contemporary pop/rock musical which shows compelling storytelling and character. Works by such composers such as David Yazbek, Jason Robert Brown, Marc Shaiman, Pasek & Paul, Andrew Lippa, Duncan Sheik, Cyndi Lauper, and their contemporaries would be appropriate. Works from other Yorkey & Kitt shows would also be suitable.

Please bring sheet music for the accompanist, or your own accompaniment track and player (WIFI is unreliable in the audition hall). No a cappella auditions please.

No monologue or cold reads will be required at the audition. Just prepare your song to showcase your vocal and acting abilities.

We encourage artists from all ethnicities and backgrounds to audition.

Diana: Delusional, bipolar, and depressed. She is trying to make her family perfect but her illness gets in the way.
Gender: female
Character Age: 40 to 45
Vocal range: G3 to F#5

Dan: Diana’s husband. He is patient and kind, but exhausted by family circumstances.
Gender: male
Character Age: 40 to 45
Vocal range: Ab2 – B4

Henry: Natalie’s classmate. A musician, philosopher, and something of a slacker, he is also sympathetic and romantic.
Gender: male
Character Age: 17
Vocal range: G#2 – B4

Dr. Madden: Diana’s psychiatrist. Quite assured in his practice, very charismatic and considered somewhat of a rock star.
Gender: male
Character Age: 35 to 50
Vocal range: A2 – A4

Please note the following: There is no chorus or ensemble in this show.

Please email Bethany Hughes at walterdalead@gmail.com and state “N2N Audition” in the subject heading. In this email please state your song selection, and the character(s) you are interested in playing. Failure to include this information will result in a failure to secure an audition slot.